MSNBC’s Brzezinski Explains How Ray Rice Can Make a Comeback, If He Has To
VIDEO

MSNBC’s Brzezinski Explains How Ray Rice Can Make a Comeback, If He Has To 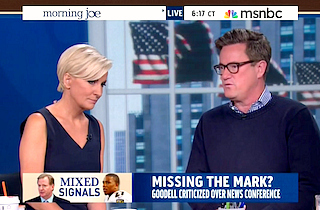 On Monday morning, Morning Joe cohost Joe Scarborough asked Mika Brzezinski — as “the only woman on set,” mind — how former Baltimore Ravens running back Ray Rice could possibly earn his way back into the league.

“We’re a country that likes to forgive,” Scarborough said. “His wife certainly has forgiven him. In fact she’s his wife now because she forgave him. What does Ray Rice need to do in the next year to be in somebody’s uniform in the next year, to say I’ve learned from my horrible mistakes?”*

“I don’t think he can be in somebody’s uniform next year given the way this has devolved,” Brzezinski said.

Howevs: “The only thing that he and his wife could do is embrace this issue and let it all out and help other people and be very, very open and transparent about their process, and talk to other wives who have suffered and become victims of domestic violence, and be champions on this issue.”

Rice was initially suspended for two games for knocking out his then-fiancée Janay Palmer, a paltry punishment for which the NFL drew mockery. He was then cut from the Ravens and suspended indefinitely by the NFL after video was released showing the incident. This weekend, more than 7,000 Ravens fans participated in a Ray Rice jersey exchange.

* NB: Scarborough’s hypothetical was premised on the theory that Rice was honest about the incident with the NFL immediately, and that it was the league that downplayed the severity of the assault.