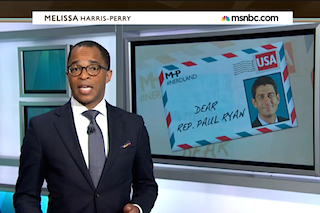 This week, Rep. Paul Ryan (R-WI) got himself into some hot water over comments he made on Bill Bennett’s radio show about the “tailspin of culture in our inner cities in particular of men not working.” The congressman later apologized, calling his comments “inarticulate” and saying he “was not implicating the culture of one community—but of society as a whole.”

On Saturday, MSNBC’s Jonathan Capehart, who was filling in for Melissa Harris-Perry, delivered an open letter to Paul which laid out just how much the congressman has to learn about the “inner city.”

Capehart applauded Paul’s apparent effort to visit with African-American men in inner city neighborhoods, but said, “if you came to the conclusion that their ‘culture’ was to blame for black male unemployment being near double the national average, I can’t help but wonder if you learned anything during your visit.”

Instead, Capehart decided to help Paul by explaining that it was the “end result of discriminatory housing policies enacted decades ago by federal, state and local governments that created a cycle of residential segregation for black people that persists to this day.”

He said if there is one group of “inner city” men who can solve this problem, it’s “you and the rest of your colleagues in the ‘do-nothing Congress’ in Washington, D.C.”