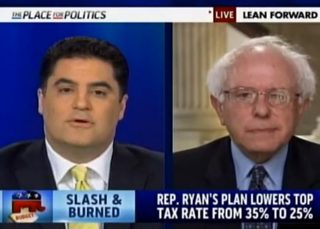 Cenk Uygur has not yet had a chance as MSNBC host to distinguish himself for keeping his side of the aisle honest, mostly interviewing ideological brethren and cruising through chats. Today was an exception, as he welcomed self-avowed “socialist” Senator Bernie Sanders to discuss the looming budget battle in Congress and pushed the Senator to answer why the Democrats were compromising on the issue: “What’s stopping you guys?”

The discussion between the two liberals, while respectful, turned heated as Sen. Sanders, technically an Independent, objected to being lumped in with the Democrats. Repeatedly noting that only a move by President Obama to go public with social program spending would bring about real change in Congress, Sen. Sanders called the Republican tax cut policy “Robin Hood in reverse” and “totally grotesque.” This was not enough for Uygur, however, who asked Sen. Sanders directly, “how are you going to stop them” and, while insisting that he revered Sen. Sanders as “a progressive fighter,” lamented that the Democrats “have been terrible at defending their ground. Terrible.”

Once again Sanders stood his ground, insisting that he had introduced legislation and that “you have to ask the President” when the executive branch would do its part for forward the liberal agenda. Uygur appeared dissatisfied with the answer, but nonetheless clarified to his audience that he remained highly respectful of the Senator. Sure, Uygur was completely reverent and, when attacking, did so from the left (a position Sen. Sanders rarely finds himself in), but this nonetheless ranks among Uygur’s standout interviews with the network by virtue of displaying at least a base level disagreement between host and guest.