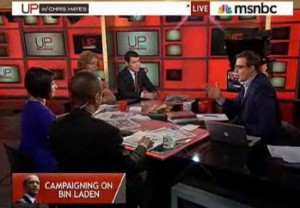 On Saturday’s Up with Chris Hayes, eponymous host Chris Hayes discussed the “parfait of frustration” at this week’s discussion of the “politicization” of the Osama bin Laden killing. While he and his panel made proper mockery of Republican outrage (you only do a victory dance when you haven’t won, duh.), Hayes expressed a difficult-to-articulate “unease” with celebrating the terrorist leader’s killing, one which he eventually articulated very well.

Following a segment about how science proves that liberals are better people, in every respect, than conservatives (at least, that’s how I heard it), Hayes and company took on the media-abetted controversy surrounding the anniversary of Osama “Here’s Lead In Your Eye” bin Laden’s permanent meeting with the deep blue sea, and President Obama’s decision to quietly acknowledge it in a campaign ad. The President was attacked for daring to wonder if Mitt Romney would have made the same call, after Romney repeatedly said he would not unilaterally go into Pakistan to get bin Laden, nor would he “move Heaven and Earth.”

The media has consistently ignored the “Romney said he wouldn’t go into Pakistan before he said he would” aspect of this story, and the Up panel bafflingly continued that trend, focusing instead on the broader hypocrisy that is Republicans ever accusing anyone of politicizing terrorism. On that count, the highlight of the segment was the Up production staff’s illustration of a tweet from Jesse Taylor that says it all: “If Bush’d killed bin Laden, he would have gotten a teardrop tattoo the next day.” 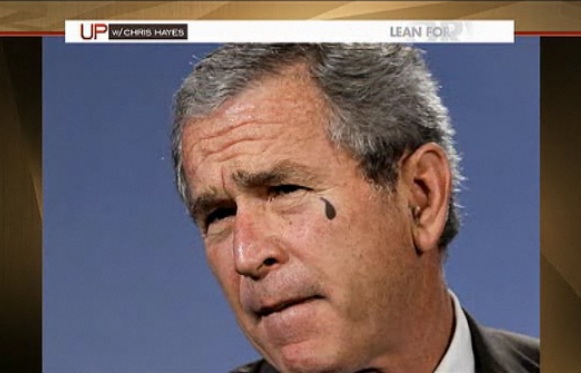 It was also amusing to learn that panelist Michelle Goldberg did not know what the phrase “spiking the football” meant until this week. As Mitt Romney would say, it’s when one of his friends’ employees gets really happy. (According to Wikipedia, “New York Giants wide receiver Homer Jones is credited as the first player to throw the ball into the field at his feet after scoring a touchdown. He first did this move in 1965, calling it a ‘spike,’ and it is said to be the origin of post-touchdown celebrations.” I did not know that.)

But Hayes also expressed some “unease” with “parading around the violence…in which the violence that is executed becomes an argument in one’s favor.”

My initial reaction was an eyerolling contempt similar to the one I had when Michael Moore gave his scattershot, knee-jerk opinions about the raid, but less violent. I suppose that’s my “parfait of frustration,” the liberal tendency to complicate even the simplest things, like the unquestionable good that is a pushing-up-seaweed Osama bin Laden. Hayes’ difficulty in explaining himself also contributed to a sense that this was just, as he called it, “squishy liberal…quasi-pacif(ism).”

Although he initially had difficulty articulating the reasons for his unease, Hayes later did quite a decent job at it. “I have an intuition that there is a connection between all of the things that I find objectionable about american projection of force abroad, and the political gains to be made from the scalps that one has gotten,” Hayes said, adding “To the degree that we have a political culture that incentivizes this push for our leaders to push themselves as strong, and as agents of violence, don’t we just keep continuing that trajectory?”

This is an excellent, inescapable point, as bullets are always an easier sale than diplomacy, but the killing of bin Laden, while it seems natural to include with other politicized uses of force like the Iraq war, doesn’t feel like it belongs in that discussion. The bin Laden raid is about as unassailable as a projection of force can get, so while Bush-era chest-thumping about the mislabeled, misguided Iraq War, and even the Obama-era drone program that has resulted in many innocent deaths, deserve the kinds of second thoughts that Hayes is applying here, it just doesn’t feel right to criticize the bin Laden raid.

I suppose his point is that, in a perfect world, you could point out this success without the swagger, and on equal footing with nonviolent, diplomatic successes. In that way, I agree, but in this world, where aggression sells, where you can start an ill-advised war and then brag that you’re a “War President,” it makes no sense to soft-pedal the one thing that pretty much everybody agrees was done right.

Panelist John McWhorter went a good deal further than Hayes, though, saying “I actually share that sense of queasiness that you have. And a year ago, when the people that were doing the ‘Uh-uh!’ celebration, I was rather disgusted, in the same way I was disgusted by the people celebrating 9/11.”

That is, of course, utterly outrageous, but even without the inclusion of the comparison to people who celebrated the attacks, I don’t think there’s any merit to complaints about Americans celebrating bin Laden’s death. I believe that death is solemn, even a welcome death like bin Laden’s, but given the very real pain we’ve all experienced thanks to his actions, I would never judge a fellow American over it.