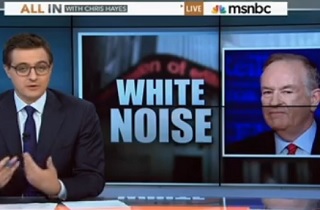 Fox News host Bill O’Reilly can’t seem to stop preaching about how right white people are to be scared of black people, and MSNBC host Chris Hayes can’t seem to quit mopping the floor with him. O’Reilly followed up what Hayes called a “super-racist rant” by telling Geraldo Rivera that he didn’t care if black people think he’s stereotyping them, and quoting the same stats he used in his first rant. On Friday night’s All In with Chris Hayes, Hayes delivered a rebuttal that included, among other things, the revelation that O’Reilly’s argument bears a striking similarity to that of the neo-Nazi main character in American History X.

Hayes hit all the right notes in rebutting O’Reilly’s relentless racial “realist” campaign to blame black people for being gunned down, pointing out that poverty, not race, is the main predictor of violent crime, and reiterating the fact that black activists and liberals actually do care about urban violence, but he offered a few wrinkles that were especially noteworthy.

One of them was that he noted the sick motivation behind conservatives’ sudden concern for black victims of urban violence. “For him, this really isn’t about his interest in helping the actual human beings being killed on Chicago’s South Side,” Hayes observed. “No. It’s about making a point. A point about the propensity of black people to commit violence, and then tossing them aside as violent people with little discipline who are unsupervised and prone to imitate bad behavior.”

What’s disturbing about this is that people like O’Reilly and Sean Hannity no longer even pretend that their concern has anything to do with innocent black murder victims like Hadiya Pendleton, instead coming right out and saying that they are to blame for belonging to a violent community.

“Black Americans commit homicides at a rate ten times greater in the United States than whites and Hispanics combined,” O’Reilly says, “and until you address those kinds of statistics, then you’re always going to have fear and you’ll always have mistrust.”

Hayes also interviewed Rep. Barbara Lee (D-CA), who called O’Reilly’s ilk “dangerous,” and pointed out that “low socioeconomic status is the largest indicator of violence, rather than race.”

“So they’re just trying to use wedge issues to pump up the far right for their own political purposes,” she added. “It’s very dangerous.”

That’s when Hayes played a clip from the film American History X that featured some cringeworthy liberal foils, but a familiar-sounding patter from Edward Norton’s skinhead character. “Look at the statistics, for Christ’s sake,” he says. “It’s one in every three black males is in some phase of correctional system. Is that a coincidence, or do these people have, you know, like a racial commitment to crime?”

“These are old arguments, right?” Hayes asks Rep. Lee. “These are arguments that are trotted out a lot.”

Rep. Lee agreed, and pointed out the inequities of the justice system that so many people, like O’Reilly, are blind to.

What I appreciate about this particular media feud is that Bill O’Reilly will probably never know it happened, and certainly wouldn’t admit it, an his fans are likely preparing to boast about that fact, as is common in these cable news pissing matches. “Chris who?”  one of the comments will read. “Who watches PMSDNC, anyway?” will read another.

But unlike the other personality-driven feuds I’ve seen over the years, this one isn’t designed to satisfy the ego, or to goad O’Reilly into a response. Hayes’ goal is what it should be: to inform his viewers, in this case that statistics don’t show that black people kinda deserve to get shot.