MSNBC’s Chris Hayes On New Newt Clip: ‘So Racist It Makes Me Want To Curse On-Air’ 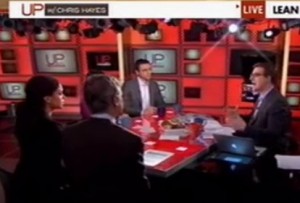 GOP presidential Lazarus Newt Gingrich has been riding high on the strength of his Birth of Newt Nation moment at Monday’s Fox News debate. On Saturday morning’s Up with Chris Hayes, host Chris Hayes revealed yet another clip of Gingrich exploiting his knack with racially resentful conservatives, a clip that Hayes said “is so racist, it makes me want to curse on air.”

To catch you up, Fox News debate moderator Juan Williams challenged Gingrich, Monday night, on his recent escalation of his decades-long pattern of denigrating black people and other minorities. Gingrich explained that he wants to help black people (he winkingly referred to “all Americans,” but Williams’ question was about his singling-out of black people; the crowd understood) learn how to get jobs, and get off of the food stamps that our “Food Stamp President” has them strung out on. The debate crowd erupted in a standing ovation that Gingrich’s campaign immediately turned into a campaign ad.

Later in the week, Gingrich thanked a woman who congratulated him for “putting that Juan Williams in his place.”

In the clip from Friday, Gingrich talks to a crowd of South Carolina voters about his putting of Juan Williams in his place at that debate, and says “The right to pursue happiness, in my judgment, implies pursuit or activity, which implies the work ethic. I had an interesting dialogue Monday night in Myrtle Beach with Juan Williams about the idea of work. which seemed to Juan Williams to be a strange, distant concept. Something worthy of study in an academic environment, but certainly not something to be subjected to young people.”

Hayes reacted strongly to the clip, saying “That is so racist, it makes me want to curse on air. That is…”

The Washington Post’s Ezra Klein was incredulous. “I hadn’t seen that before. That is unbelievable. That’s worse than anything NPR ever said about Juan Williams. Way worse.

The Daily Beast‘s Michelle Goldberg said “I kept thinking I bet Juan Williams wishes he had stayed at NPR.”

“I think this is part of the point,” future Up lead-out Melissa Harris Perry began. “The fact you can name three jobs Juan Williams has had in the last week, I mean, I certainly have a lot of ideological disagreements with Juan Williams, but the idea that he is not a hard worker is bizarre.”

“More than that,” Harris-Perry continued, “the other thing that’s bizarre, most of Juan Williams’ ideological discourse, at least over the course of the past decade, has tracked closer to this scenario about, you know, hard work. In fact, I recently heard him talk about how the poor have to defer gratification, they can’t — they’re not going to be able to buy the consumer items. They have to make different sorts of choices. It has a strong narrative, not only personal work ethic but a strong narrative. The sense this could be about anything other than race is pretty appalling.”

I shared Klein’s surprise at this newest clip, and I think that’s a symptom of how the mainstream media has given Gingrich a pass on his race-baiting rhetoric, reporting his gains in the horse race, but doing a poor job of reporting how he has been buoyed by this stoking of racial resentment. Hayes & company go on to say that this sort of thing will hamstring Gingrich in a general election, but I’m not so sure.

Gingrich and his erectly-ovating supporters have convinced themselves that he’s not being racist, he’s just telling uncomfortable truths about black people that the liberal media is too cowardly to say out loud. If they’re also too cowardly to say, out loud, that Gingrich is using reprehensible racial politics, you might be surprised at how Gingrich’s rhetoric resonates with “independents,” a notoriously malleable (and white) bunch.