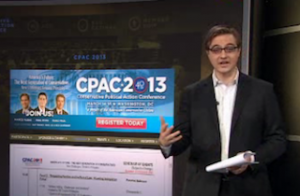 MSNBC’s Chris Hayes found himself to be the subject of his “Story of the Week” Saturday when he discussed a recent invitation he received from the Conservative Political Action Conference. Hayes said he was “surprised and oddly delighted” by the invitation and he initially thought “of course I’ll go.” But then, he thought better of it.

Hayes discussed receiving a form letter calling him “one of America’s leading conservative voices” and thought it could be enlightening, both for Republicans in attendance and himself, to share the stage with the likes of Mitt Romney and Sarah Palin. He changed his mind after being reminded of a “pretty gross episode” from 2011.

That year, the board of the American Conservative Union (ACU), which sponsors CPAC, voted to ban the pro-gay rights group GOProud from signing on as a sponsor of the conference. Hayes stressed that he does not have any special affinity for GOProud, but “the point is the principle.” He explained, “it’s not OK to ban organizations for reasons of pure bigotry. But the ACU does this because there’s a powerful constituency within conservatism that won’t have it any other way.”

Hayes found this policy, which according to GOProud is still in effect, to be particularly ironic since so much of this year’s CPAC will be dedicated to figuring out how to make the Republican party more “inclusive” in an effort to appeal to the current majority in America.

Ultimately, Hayes indicated that he would be turning down the invitation, unless the ACU decided to allow GOProud to participate in the annual event. He closed his segment with a question, asking, “In the last few months there has been an absolute avalanche of articles and blog posts and essays and magazine cover stories and TV segments about How to Save the Republican Party, but is the Republican party worth saving?”

Watch video below, via MSNBC