MSNBC’s Chris Hayes: Was Shutting Down News Of The World A Way To ‘Destroy The Evidence’ 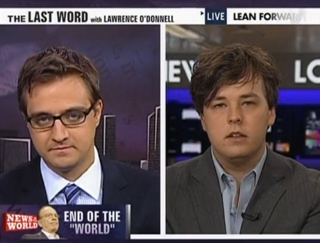 While News International’s shutdown of News of the World confirms at least some wrongdoing on the part of editors there, many questions are still left unanswered, particularly in light of the fact that the head of the paper, Rebekah Brooks, has apparently survived the storm for now. On The Last Word tonight, host Chris Hayes gave a comprehensive recap of the story thus far and questioned why head Rupert Murdoch would “throw the journalists [of News of the World] under the bus.”

While the Murdoch family continued to clean up after it was revealed that the paper’s employees may have hacked into several numbers belonging to celebrities, terror victims, and assorted people that they found may be useful for a story, Hayes reported that the employees at the paper there were cleaning up their desks, the century-plus-old paper now a thing of the past. Some even tweeted that they were “getting driuuuuuuuunk” in reaction. Hayes welcomed back The Independent‘s Archie Bland to discuss the mood among the former employees of the company, which Hayes argued, from the given posts, “feel like they’re being sacrificed to protect Rebekah Brooks.”

“They’re completely right to feel that,” Bland replied, adding that “the paper has kind of cleaned house since those days” when they were alleged to have been hacking papers– “this isn’t really the practice that goes on there anymore.” He also noted that what would be a top headline on any other news day– former News of the World editor and current Director of Communications Andy Colson potentially being arrested tomorrow– seems to have become second fiddle to the very old paper closing its doors.

The motive behind that decision, Hayes then noted, is still obscure. Both Hayes and Bland agreed that it was a possibility that they believed shutting down would prevent further investigation or permit records to be kept private, but ultimately no conclusive reason for the reaction has been given.