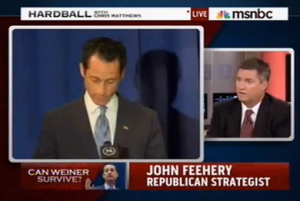 MSNBC’s Chris Matthews, in a discussion of yesterday’s bizarre and potentially career-ending news conference by Rep. Anthony Weiner, stepped strangely (and some will certainly say offensively) into the role of Weiner’s wife, saying Huma Abedin, might be “partly responsible.” Matthews’ argument was that Abedin, an aide to Secretary of State Hillary Clinton, was–according to Weiner–at least partly aware of Weiner’s pre-marriage use of social media to engage in sexual banter with young women.

Matthews’ comment got an immediate and blunt rejection from his panel:

FEEHERY: I think we all feel for his wife right now. You know, Democrats think back to Gerry Studds…

MATTHEWS: He says his wife knew. He laid it out on her.

FEEHERY: Which is terrible. Terrible mistake.

MATTHEWS: But maybe she’s party responsible if she knew about it?

Later in the show, Matthews backtracked, as Think Progress reports:

Near the end of the broadcast, Matthews backtracked: “Putting a bit of the blame on her, I don’t think that’s fair. I hope I didn’t give the impression that I agreed with that. I certainly don’t. This is his problem. People love people, they marry them despite their faults.”

For what it’s worth, Weiner did not say that his wife was aware of his recent conduct and only told her that he’d been lying about it this morning.
But in any event, it’s safe to say that his wife is not in any way “responsible” for Weiner’s inappropriate conduct and dishonesty. As Weiner himself noted, “I came here to accept the full responsibility of what I’ve done.”

Watch it here via MSNBC