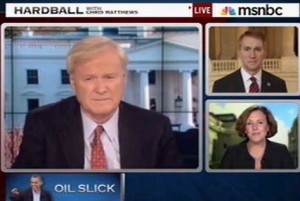 On his MSNBC show last Thursday, Chris Matthews made a rather surprising admission on-air: politically speaking, he’s a big centrist. When talking about the Keystone XL pipeline, Matthews said that when someone like President Obama tries to take the middle ground on an issue, they tend to get hits from both sides. Joan Walsh nodded in agreement with the sentiment, and then Matthews said, “Take it from a centrist, I know what it’s like.”

RELATED: Chris Matthews: Tea Party Is Like The Bully In Class Beating Up Kids For The Good Lunch

Let’s all take a minute to process that. Chris Matthews, the man who said a little over four years ago that listening to Obama speak gave him a “thrill going up my leg,” said he’s a centrist. Over the course of his career, Matthews has made statements that seem quite centrist in nature, like his admission that if he were a Republican voter in the New Hampshire primary, he would have voted for Jon Huntsman. Or when he admitted that U.S. media tends to “lean a little to the left.” And Matthews could very well be a political centrist. For who are we to tell another man what’s inside his own heart?

But seriously, though, it’s kind of hard to imagine Matthews seriously being an actual centrist. Here’s a list of Matthews headlines from Mediaite since December. Kindly find the one that is not like the others.

This isn’t to say Matthews has never been critical of Obama, but he’s certainly used less tempered language about the president than his Republican rivals.

The only logical thing I can imagine Matthews meant is that he’s said things that have offended both sides, and on that count, he’s one hundred percent accurate. He set off the right (particularly Glenn Beck) with his joke a few weeks ago about the GOP candidates outsourcing the election to a Mormon as if he was an Indian tech support person. But Matthews has also said in the past that the only reason Hillary Clinton became a senator is because “her husband messed around.”

We could go on until the cows come home. The point is, Chris Matthews a political centrist?, Come on.