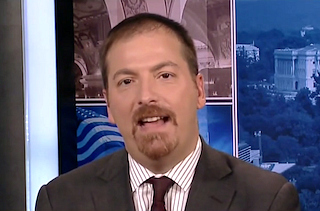 MSNBC chief political analyst Chuck Todd told Morning Joe Tuesday morning that President Barack Obama’s claim that people would be able to keep their health insurance under the Affordable Care Act was a poor promise to have made from the start, as it relied on insurance companies’ compliance, and was made even worse by the fact that the administration knew as early as 2010 that it would not be the case.

“At the time all of us said, ‘We’re highly skeptical of how he can make that promise,'” Todd continued. “Let’s look at our own company. We can’t decide to keep our health care if Comcast decides to change health plans. We’ll get a choice, we’ll get maybe an a or b or c, depending on different things. So when the president said it, basically only people on Medicare, TriCare, Medicaid could he keep that promise for.”

“The bigger part of the story, the damaging part, is [NBC’s] Lisa Myers is reporting that the president was saying things that he knew were not true,” host Joe Scarborough said, referring to an NBC News story Monday night that said the White House knew many would lose coverage under the ACA. “Lisa Myers reported that he knew that he was not telling the truth. And he said it at the State of the Union address, he said it in 2012, based on the NBC News investigation, the president knew he was telling deliberate untruths. How do they get around that?”

“I never understood why he said if you like your health care plan you can keep it, because he was relying somehow on the insurance companies to keep this promise,” Todd said. “Again, this goes to making promises you couldn’t keep. And it goes even worse. Lisa’s report says they knew this wasn’t going to be case for a large group of people. So I don’t get it.”