MSNBC’s David Corn On Mitt Romney ‘Bullying’ Incident: ‘This Was An Assault’
video

MSNBC’s David Corn On Mitt Romney ‘Bullying’ Incident: ‘This Was An Assault’ 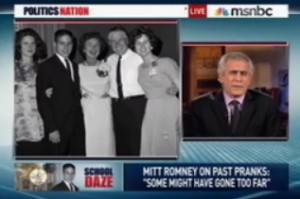 On Al Sharpton‘s Politics Nation Thursday night, MSNBC contributor David Corn cut through the weaselly apologies and creepy chuckling claims of amnesia from Mitt Romney over allegations he held a high school classmate down and cut his hair, telling Rev. Sharpton “Let’s be clear here, this was not a prank,” adding “This was even more than bullying. This was an assault. It was violent.”

Corn also made the excellent point that, while an incident from 50 years ago arguably has little relevance to the current-day presumptive Republican presidential nominee’s character, it’s “what the reaction today is that’s where (Romney) is failing the character test.”

Romney has spent the day trying to do damage control on a Washington Post story that paints a sick picture of a young Mitt Romney who terrorized classmates, including now-deceased John Lauber, whose long, bleach-blond hair so incensed him that he led a “posse” of chums to hold him down, screaming, as Romney chopped those bothersome tresses.

Rev. Al played several clips of Team Romney’s responses throughout the day, which included laughing non-denials and a half-assed “if I hurt anyone” apology that panelist Cynthia Tucker rightly dismissed.

Laughing off violence and violation is the hallmark, not just of the bully, but of the culture that enables them, and make no mistake about it, laughing it off is exactly what Romney is trying to do here, and with a series of obvious lies.

At least, I hope Romney is lying when he says he doesn’t remember this incident, but he “won’t argue” with the reporting on it, because that would mean he spent so much time gang-assaulting people with sharp implements that they all just run together.

He’s also employed a clever dodge in claiming that he didn’t think the guy he attacked was gay, which is probably true of most of the people who get called “faggot” by bullies, but Romney isn’t well-served by the just plain weird claim that nobody thought about sexual orientation in the 60s. Finally, what kind of person isn’t quite sure “if I hurt anyone” by holding them down and chopping off their hair?

Corn is absolutely right, Romney’s problem isn’t so much that he did a terrible thing when he was young, but that the intervening years haven’t taught him how to feel bad, or to feel anything, about it.

Worse than that, though, Mitt Romney is either a horrible liar or a sociopath, or both. Since his surviving classmates seem to have vivid memories of the incident, I’m betting it’s the former. If nothing else, we can add the late John Lauber to the short list of people that Mitt Romney has demonstrated an ability to stand up to, at least in a crowd. Here’s hoping Iran looks sufficiently faggoty for President Romney.

Update: The Romney campaign now claims that “one of the ex classmates who provided statements did not witness incident in Post story,” the incident that Romney claims not to remember.