MSNBC’s Donald Trump ‘Town Hall’ a Joke, and Not a Funny One 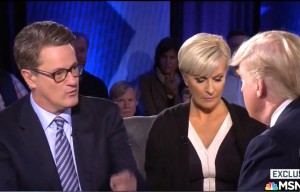 A couple of disturbing trends converged on MSNBC Wednesday night, as the network’s relentless promotion of Donald Trump merged with Morning Joe host Joe Scarborough’s influence at the network to produce what was promoted as an “exclusive town hall” with the Republican presidential frontrunner, but which played more like a 48-minute infomercial for the real estate magnate. The only thing missing was Trump leading the audience in a call-and-response “Set it and…” “FORGET IT!”

Fox News’ Greg Gutfeld joked that the event was more like a Joe Scarborough audition for vice president, but even the show’s producers seemed to be angling for a spot in the Trump administration, as the entire affair was shot in the kinds of closeups that Susan Lucci would kill for, along with tight three-shots of Trump, Scarborough, and Mika Brzezinski that made you wonder when Gary Busey was going to show up and ask “Did somebody order pizza?”

Stylistic flourishes aside, the event also featured questions tailor-made to pull Trump out  of the fire with conservatives. For example, Ted Cruz has been hitting Trump on his potential Supreme Court nominees, so Scarborough spoon-fed him a question about making Heller v. District of Columbia a litmus test, but explaining the decision in detail as he did:

Without that little tutorial, it’s doubtful Trump would’ve been able to answer with more than “Heller? I barely know her!”

MSNBC just finished going to war with CNN over the mere implication that Scarborough and Brzezinski are tilting toward Trump, but after their constant live airing of Trump rallies, their fawning Chris Matthews Trump “documentary,” and this travesty, it’s MSNBC who need to think about declaring themselves in-kind campaign contributors. They’ve become a joke, but I’m not laughing.