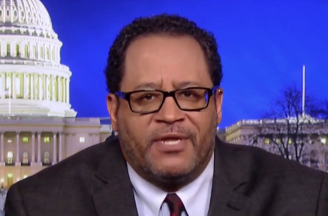 Dyson made the comments in reaction to the news that Paul had met with controversial Nevada rancher Cliven Bundy, despite previously denouncing his racist views. “How bad does this look for Rand Paul?” host Ed Schultz asked. “Does he have to disqualify Bundy at any level?”

“What he has done is political calculation,” Dyson said. “…He figures that he gains more by siding with Cliven Bundy than being opposed to his vitriolic viewpoints and racist beliefs. And you would think that Rand Paul would be a bit more careful in the aftermath of what happened in Charleston and the nation’s swing against Confederate flags and other symptoms of racial animus in this country.”

The former Democratic Governor of Alabama, Wallace is less-than-fondly remembered for blocking the doorway of the University of Alabama to prevent black students from entering, running for president on a segregationist platform, and his famous line, “segregation now, segregation tomorrow, segregation forever.”