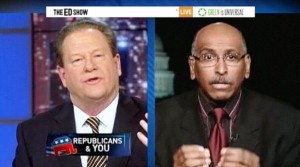 You may recall that, last Friday, Bill Maher invited MSNBC host Ed Schultz and former Republican National Committee chairman Michael Steele onto his show to yell over one another as viewers clapped in delight discuss proposed Medicare vouchers.

On his program, Schultz kept that discussion going. He noted recent poll statistics showing that 45 percent of Republicans believe President Barack Obama was born in another country, with 22 percent claiming they “don’t know” where on earth the man was born. Schultz then pointed to Obama’s certificate of live birth, driving home that the document has been verified, continuously… despite what some people, like ohhh Mr. Donald Trump, might be preaching. How is it, wondered Schultz, that people like Trump can distract from “what’s real” by relentlessly focusing on the “birther issue”? The thought of Schultz and Karl Rove – who has said pretty much the exact same thing – discussing this very matter over endless salad and breadsticks at Olive Garden amuses us greatly. But, just as fun for us, really, Schultz brought on Steele.

“You’re a good sport for coming on, and I appreciate it,” said Schultz. “We had a fun time the other night on Bill Maher’s show.” Steele heartily agreed:

We did, we really did. It was a good exchange; I love the back-and-forth, you know. What I loved about it was two guys showing their real passion for the issues of the day and to me was exciting.

Yay, you guys! But what does Steele think about the fact that a majority of Republicans apparently don’t believe Obama is a citizen? Well, it’s not really an issue for Steele, who thinks Americans would do well to focus on other issues – like the economy. And it was like Schultz wanted to reach across the split screen and give Steele a hug, or a coupon for free hugs.

Steele then brought up that he knows of some conservative Democrats who also aren’t sure about Obama’s place of birth. “Not 67 percent!” responded Schultz, before asking what (we think) is an extremely important question for all Republicans to think about right now: Is this issue hurting the Republican party? Steele gave an extremely adamant “yes.” For one, he notes, it “puts a drag” on other discussions, such as that on the budget.

Now, enough with all this “agreeing on things”… thing. Back to the proposed Medicare voucher system! Asked Schultz:

When Steele mentioned seeing polling going the other way, Schultz asked if he thought the American people want a voucher for Medicare. The two then argued over… that. And job creation. But it was civil – if heated! And not so loud that it was all completely unintelligible!

Gonna say it: These two have amazing chemistry, and we’d listen to them discuss microwaving Peeps.

Take a look at the segment for yourselves, courtesy MSNBC: