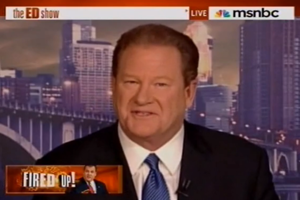 Schultz’s point was that the right seemed to be constantly telling liberals to “calm down” while embracing loud voices like Beck, citing an inherent hypocrisy in the fact that those two get along at all. “Christie has no business telling people to be respectful,” he argues, both because of his policies and his attitude. What’s more, Christie, says Schultz, is an “out of touch, smug bully” and, ultimately, nothing more than a “cold-hearted fat slob” who, “when he doesn’t like what he hears, he accuses the other side of shouting.” Schultz concludes that someone who opposed divisiveness should not be friendly with Beck. The alternative goes without saying. He culminated by asserting that he would not stop shouting in favor of his issues– namely, racial equality and social justice.

Certainly Schultz is not the first to make Christie’s weight an issue, though the last time someone did– namely, former governor Jon Corzine, the move completely backfired. That was a campaign, however, conducted by an elected official; surely Ed Schultz is not to be held to the same standard as a governor of a state. And there’s the fact that the comment is but one after an extended monologue (of which not all is below), and that Schultz has built something of a brand on not being able to keep his mouth shut, but it’s a brand whose audience is ever shrinking because every time he comes close to having a point– say, the fact that Christie is often rude and inexcusably abrasive in media appearances where cordiality is expected– he behaves precisely in the manner that he condemns the other side for behaving or otherwise defeats his own argument in a completely avoidable way. The more childish his insults get, the less of a reason he gives media consumers to bother giving him their attention.

Below is the clip from the September 24th Ed Show, via MSNBC, below: