MSNBC’s Ed Schultz: ‘I Think Donald Trump is a Racist’ 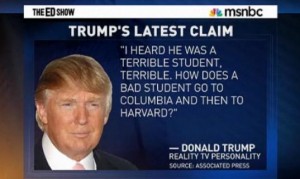 Various commentators (myself included) have consistently called out the Birther movement, and other attacks on President Obama‘s background, as racial dogwhistles, cynical exploitations of the racial mistrust of others. MSNBC’s Ed Schultz took it a step further Tuesday night, flat-out calling current Birther superstar Donald Trump a racist.

Schultz took issue with Trump’s latest statement about President Obama’s educational background, that he “heard (Obama) was a terrible student. How does a bad student go to Columbia and then to Harvard?”

Trump never makes clear where he “heard” that Barack Obama was a “terrible student,” but he might have been referring to the investigative work of one Barack H. Obama, who wrote in his autobiography that he wasn’t always a great student.

While Schultz never actually connects the dots, he’s clearly referring to the implication that Obama advanced solely on the basis of his race. Here’s the clip, from MSNBC:

The issue of race, of course, isn’t as simple as saying “I think so-and-so is a racist.” It’s not like being pregnant. Racism is a spectrum disorder. It’s also possible (and quite common) for people to hold racist attitudes and not even know it. For example, many people don’t see the harm in repeating racial stereotypes that they see as “positive,” or presenting statistics to prove a point about a given racial minority. You can be a good person, and still be kinda racist.

Trump seems to be clueless about race, at best, and may well be ignorant of the racial motivations behind Birtherism and Affirmative Action attacks. It goes beyond asking when the last time this was done to a white president, or candidate. The fact is, it’s not even possible for a white candidate to face an attack like the one Trump is leveling about the President’s admission to Columbia and Harvard.

In the generally-accepted sense of the word “racist,” the closeted Klansman, Trump doesn’t measure up, but it is time for him to at least reexamine his relationship with “the blacks.”