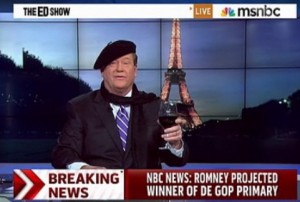 Someone at The Ed Show has a flair for prop comedy. On Tuesday night, host Ed Schultz mocked presumptive Republican nominee Mitt Romney‘s longing for strolls on the Champs-Élysées by donning a progression of Franco-philic accessories. Romney has taken guff from political pundits over his choice to fondly remember vacations in France, rather than his years as a missionary, but Shultz was also quick to point the right’s hypocritical silence on Romney’s Frenchiness.

On Monday, Gov. Romney told a reporter ”I have a lot memories of France,” adding, “The best memories were with my wife on vacations from time to time in France. The last vacation we had there, walking around the city of Paris, and walking, not just the Champs-Élysées but also over to the Jardin (pronounced JAR-din) of Luxembourg and around the city…one of the most magnificent cities in the world. And I look forward to occasional vacations again in such a beautiful place.”

Schultz returned from the Romney clip, suddenly wearing a scarf over his suit, and pointed out that “less than a week ago, Mitt was complaining about obama’s elaborate vacations,” and that “the Republican Party is about to nominate the type of candidate that they have spent the last eight years trashing. President Obama was an Arugula-eating Harvard snob who put fancy mustard on his cheeseburger.”

“So much for the conservatives Freedom Fries and Liberty Toast,” he said. “Time to break out the Bordeux. The Republicans have a French-speaking nominee with two Harvard degrees that’s worth a quarter of a billion dollars.”

However you feel about Mitt Romney and France, the sight of Ed Schultz in full Parisian regalia is pure comic genius.

Cenk Uygur, host of Current’s The Young Turks, surprisingly defended Romney on his show last night, calling the France thing a non-issue. While I agree that this sort of thing lacks substance when compared to things like the economy, it’s legitimate to point out the hypocrisy involved, plus it’s a helluva lot of fun.

Would we have a more informed electorate if the media ignored things like the dueling dog stories? I’m not so sure about that. The sizzle-over-steak style of coverage that has overtaken the political media might be a buffet of empty calories, but without it, who would be left at the table?