MSNBC’s Schultz Slams Drones In Post-Speech Coverage: ‘Just How Many Innocent People Are We Killing?’
VIDEO

MSNBC’s Schultz Slams Drones In Post-Speech Coverage: ‘Just How Many Innocent People Are We Killing?’ 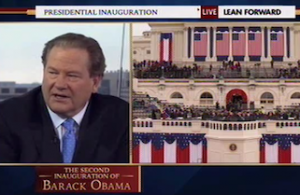 If you were watching MSNBC today, one of the first things you would have heard when the inauguration ceremony concluded was Chris Matthews praising President Obama‘s speech as “Lincoln-esque.” Other commentators including Rachel Maddow, Lawrence O’Donnell and Chris Hayes had equally laudatory things to say about the president. But not all of MSNBC’s post-inauguration coverage was so sunny.

Ed Schultz turned his attention to the foreign policy aspects of the speech and the controversial drone program in particular, saying, “We’re also entering into a new age of some big decisions in foreign policy, because this country right now is starting to get some adversaries around the world because of our drone policy. That was not the situation four years ago.”

Giving voice to the concerns of many Americans, liberal and conservative, around the country, Schultz continued, “Our foreign policy is going to be judged on just how aggressive we get with that, and there’s a growing concern in the community across the country about the drone attacks. Just how many innocent people are we killing? And there’s been concerted conversation about that we have to reel this in, and President Obama, I think, is going to hear a great deal about that when it comes to foreign policy in the coming months. Just how aggressive are we going to get?”

Maddow, who addresses the drone program in her recent book Drift: The Unmooring of American Military Power

, tied Schultz’ comments to a specific line from Obama’s speech: “We, the people, still believe that enduring security and lasting peace do not require perpetual war.”

She explained, “Legally that’s the justification that they cite for saying why it is that we can kill people in places where we’re technically not waging some sort of hot war. That there is a global war still underway, and the authorization of using military force is from 9/11. If that changes in this term, I have to tell you, I will be surprised, but there’s more pressure every day.”