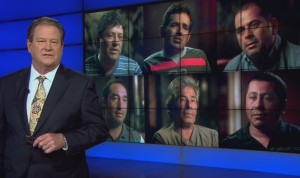 It’s been almost a year since the miraculous rescue of 33 Chilean miners captured the world’s attention, and to mark the occasion, MSNBC is premiering the documentary 17 Days Buried Alive, this Friday, that focuses on the 17 days immediately following the collapse, when the fate of the miners was still unknown. Ed Schultz, MSNBC’s resident champion of the working man, hosts the documentary, which airs at 10pm ET on Friday, and he spoke to Mediaite about what this story means to him, and what it should mean to the rest of us.

The film is built around the narratives of six of the survivors (including Mario Sepulveda, the unofficial “made for TV” spokesman of the group), telling their stories for the fist time here, and features reenactments of the time they spent in the mine before their whereabouts were discovered. According to the film’s promotional materials, the miners “swore to one another never to reveal what took place so many feet below the Earth’s surface during what they called ‘The Dark Days’ – the 17 days that passed when they didn’t yet know whether or not they would ever be rescued,” and that they “have stayed true to that pact never to tell what took place those first 17 days – until now.”

Schultz explains that “one of the reasons why they stayed quiet to this point, and got together to tell this story, was because they wanted to make sure the story was done properly, and their story about workers was explicitly told, which is a very courageous move on their part.”

It’s a hell of a story, and although Schultz touches on issues like mine safety and disaster preparedness, he wisely stays mostly out of the way, letting the miners’ narratives, and the viscerally effective reenactments, tell the tale. “I think this is a stark reminder that there’s a lot of workers who are in dangerous jobs that don’t have the protections that they need,” Schultz told me, “and often times we see responsibilities are not lived up to, and I think that the big picture is it’s an eye-opener to how workers are treated. We just cant put profit over safety and people, and I think in this case you can certainly point to it.”

The story’s relevance to workplaces here, and elsewhere, is part of what attracted Schultz to the project. “I was attracted to the project because I think its a workers issue,” he told me,  “and thats one of the themes of The Ed Show, who’s to say that couldn’t happen in America? We put profit ahead of people, often times in our culture, and I think this story needed to be told.”

At its heart, though, Schultz says “It’s a gut wrenching, very compelling story about workers who are facing death. It displays a wide range of emotions of the workers and it’s very emotional.”

While the story is incredibly moving, the film avoids heart-tugging manipulation. The interviews with the miners are mostly clear-eyed, woven with gratitude at being alive, which makes the few emotional moments pack an authentic punch.

Schultz says he found the loyalty of the miners particularly affecting. “They had to have loyalty to one another if they were going to survive,” he said, “and its a real testimony to leadership and the human spirit.”

“I think when you watch this documentary, you put your self in their position, and that’s how it should be viewed.” he continued. “You come away with just amazement with how they did it.”

Here’s a clip from the documentary, which airs tomorrow night at 10 pm: