MSNBC’s Ed Schultz: Targeting “Psycho Talk” With Psycho Talk Of His Own? 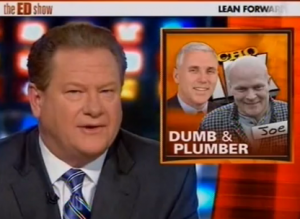 MSNBC’s tough-talking Ed Schultz starts his Ed Show every night by confessing one story’s got him “fired up tonight.” Fired up, every night.

And that’s fine. So’s going after politicians and others who need to be schooled–that’s what journalism is all about: speaking truth to power. So here comes Schultz on his show heading to a commercial break, promising he’s about to hand a congressman his proverbial head–or at least, give him a dose of reality so unvarnished–in Schultz’s words–“he’ll be praying to the porcelain God when I’m done with him.”

Holy moly. How tough does an on-air confrontation have to be to send a professional talker/debater like a member of Congress running to the men’s room to throw up? Gripping television? Not so much.

A few problems, for starters. The target of Ed’s “Psycho Talk” segment, Rep. Mike Pence, isn’t actually a guest on the show, so he won’t be confronted directly with anything. Worse, when Schultz gets to the segment, he plays a clip from another interview on another show, and then mocks Pence for a comment he made suggesting Joe the Plumber was “maybe the best economist in the last election cycle.”

Schultz then attacks Joe the Plumber, not over the economy, but for not being a plumber, and not paying his taxes. Wait. What about Mike Pence, the guy who’s supposed to be about to lose his lunch? Basically, the nausea-inducing throwdown ends up looking like this: what Pence said about Joe the Plumber was “dumb psycho talk.”

So there. Head to the head, Mr. Pence. You’ve been served!

If you want to see an interview (with another party actually participating) where the guest might conceivably be made nauseous–not by the reporter calling him a “psycho,” but rather by respectfully challenging his facts, watch Anderson Cooper.

Schultz’s “Psycho Talk” segments usually involve personal attacks, but rarely aimed at anybody who can defend themselves. He’s called New Jersey Gov. Chris Christie a “smug bully” and a “fat slob,” and on his radio show he notably tore into boring, Mormon Harry Reid: “Harry, you are ball-less.”

So why’s Ed Schultz so “fired up?”

The irony is that Fox News hosts are routinely accused of name-calling and baseless attacks. But watch Bill O’Reilly and you’ll see he may call you a pinhead, but if you’ve got the guts to go on his show, he’s going to be a gentleman about it. (H/T Newsbusters)