MSNBC’s Ed Schultz: We Should Consider Ground Troops in ‘Religious War’ with ISIS 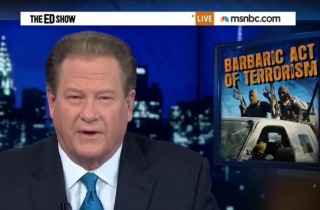 After a “weekend of terror around the globe,” MSNBC’s Ed Schultz thinks it’s time for the United States to consider putting troops on the ground for this “religious war” with the Islamic State.

On Sunday, ISIS released a video purportedly showing the beheading of 21 Coptic Christians in Egypt. “I think this act of mass murder amounts to a religious war,” Schultz said Monday on MSNBC, as first spotted by NewsBusters. “As I see it, the United States is going to have to have continual reviewal [sic] of its strategy. We can’t sit back here and watch hordes of people get their heads cut off. And why would we tell ISIS there’s no way we would ever put ground troops in combat situations?”

This isn’t the first time Schultz has advocated for at least considering a renewed ground troop presence in the Middle East. Back then it was because he wanted to avoid the U.S. “outsourcing” of American security to foreign countries.

This time, the MSNBC firebrand thinks because the militants are acting as though this is a “religious war,” ground troops might possibly be the only way to “turn back ISIS.” However, he lamented, “we have told ISIS well that’s not going to happen. We have told other countries who are getting hit by this group that we’re not going to put ground troops in.”

He also criticized current Obama administration handling of the situation. “What we’re doing isn’t strong enough, isn’t working,” he said. “Now whether that means we need to put ground troops and get them involved, I don’t know. I’m not a military expert.”