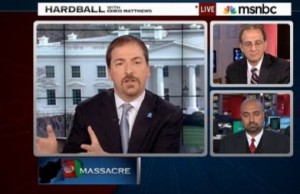 On Friday’s edition of Hardball, my friend Chuck Todd filled in for host Chris Matthews, and took a look at the implications of a deadly riot that was allegedly inspired by Pastor Terry Jones‘ recent burning of the Qu’ran. Todd was joined by guests James Zogby, President of The Arab American Institute, and Time Magazine World editor Bobby Ghosh, who explained to Todd that burning a copy of the Qu’ran was “much more inflammatory than burning a Bible” because of the merits of the two texts.

This is a bit of a tricky story, because there are a lot of competing themes. For example, the right of Pastor Jones, or any American, to burn something as a form of expression, versus whether such an act is a good idea, or whether the media should have reported on it. Personally, I believe in an America where the freedom to burn its flag is the surest sign that she can survive anything, but especially some loser’s Zippo lighter. As an atheist-leaning agnostic who was raised in an Evangelical church, I’m sure that my former Brethren have the same faith in the Bible’s ability to withstand such an immolation. The same can probably be said of the vast majority of Muslims, as well, regarding the Qu’ran.

Having said all of that, I dispute the notion that Jones is blameless, or that apportioning him some responsibility for the attack is somehow equal to justifying it. If a man has a gun to a child’s head, and you sneak up behind him to yell “BOO!” in his ear, you have a share in the consequences that does not reduce the gunman’s guilt. Jones’ act was just that, a provocation and nothing more.

It is in that context that Chuck Todd attempts to discuss the attack on the UN mission, and its relationship to Pastor Jones, with his guests: (from MSNBC)

Here’s a transcript of Ghosh’s explanation:

GHOSH: The thing to keep in mind that`s very important here is that the Koran to Muslims, it is not — it is not the same as the Bible to Christians.

That makes it sacred in a way that it`s hard to understand if you`re not Muslim. So the act of burning a Koran is much more — potentially much, much more inflammatory than —

Ghosh’s statement is not only based on a faulty understanding of Christian beliefs, but its very premise is patently offensive. Both the Qu’ran and the Bible were physically written by men, and are believed, by their adherents, to be the divinely inspired word of God. I don’t really have a dog in this fight, I’d be much more upset if someone burned a copy of Slaughterhouse Five, but I know enough about Christianity to be offended for them.

While I think his framing of this as a fringe issue is dead-on, I disagree with Chuck in one key area. I don’t have a problem with the way the media covered Jones, because the overriding truth to that story was that most Americans reject his brand of “faith,” and of expression. (I’ve also never agreed with the rationale that “we” as a country can provide terrorists with recruitment opportunities in situations like this, as if terrorist recruiters would otherwise be stymied, honor-bound to only advertise truthfully. We should make decisions based on the merits, not on whether it’ll look bad on an al Qaeda recruiting poster.)

While watching that Hardball clip, I must confess to a moment of anger when Chuck said he wouldn’t show footage of the Qu’ran burning, but did show footage of a stylized American flag being burned. That anger gave way to pride, though, as I realized that Todd’s reason for not showing the Qu’ran footage, the possibility that it could incite even more violence, doesn’t really apply to the American flag.

But that’s not because we don’t love our flag, or Christians, the Bible, every bit as much as Muslims love their holy text. It is because we revere that for which these sacred symbols stand that we don’t go around killing people for burning them, just as most Muslims do not. Someone should have told those murderous rioters in Afghanistan that that same reverence is also what keeps most of us, all of us except one, from burning other people’s sacred symbols.