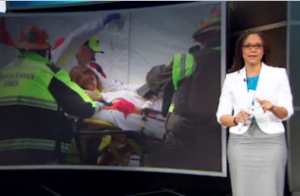 Saturday morning on her MSNBC show, Melissa Harris-Perry posed a question that has gotten a lot of discussion over the last two weeks: what constitutes terrorism? In the wake of the Boston Marathon bombings and last year’s Newtown shootings, the host wondered why the one we consider “terrorism” inspired enormous “action” from the government while the one that is simply a tragedy brings only “inaction.”

After the Boston bombings, Harris-Perry said, “we didn’t know right away what caused” the culprits to do it, but “many decided almost immediately what to call it: Terrorism.” She explained that by calling an act of violence “terrorism,” we are setting up a “catalyst to provoke the state into action.” When the manhunt for the younger suspect began early last Friday morning, “no fewer than 20 different law enforcement agencies and more than 1,000 officers” descended on the Boston metropolitan area.

“But this is the very same week when we watched the final round of the political tug of war that began with another callous and calculated act of mass violence,” she said, referring to the Newtown, Connecticut school shooting. “Only the events of that day fell short of the mark for what we call terrorism. And the state’s response in this case could most accurately be described as inaction.”

Harris-Perry played a short clip of President Obama “losing his cool” over the Senate’s failure to pass even a compromise on expanded background checks during his fiery speech in the White House Rose Garden. Without explicitly saying the country’s priorities are out of whack, Harris-Perry subtly questioned why one act of mass violence can spur the country to massive action while another can leave us “pretty much exactly where we started.”