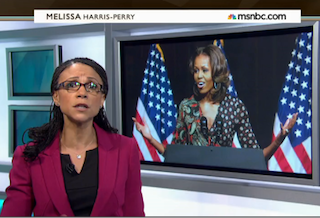 Melissa Harris-Perry’s “open letter” this Saturday was directed squarely at Washington writer Michelle Cottle, who penned a cover story for this week’s POLITICO magazine titled “Leaning Out: How Michelle Obama became a feminist nightmare.” Harris-Perry offered up a fierce defense of the first lady, asking Cottle, “Are you serious?”

“Given how simplistic your piece is, let me make this very simple: you are wrong,” Harris-Perry said, as she attempted to sysmatically explain who unrealistic it would be for Michelle Obama to “come roaring out of the White House battling for reproductive rights.” While Cottle dismissed some of the first lady’s signature projects as “fluff,” Harris-Perry emphasized the importance of “fighting childhood obesity, one of the biggest public health crises of our time.”

However, it was the racial implications in Cottle’s piece that drew the most criticism from Harris-Perry. “You seem to think she is steering clear of the ‘Angry Black Woman’ stereotype,” she said to Cottle. “But when she calls herself mom-in-chief, she is rejecting a different stereotype–-the role of Mammy.” She added, “So that can be your feminist nightmare, but it is my black motherhood dream.”

Harris-Perry drew a line in the sand between the white and black versions of feminism, and even hinted at how that divide could impact the 2016 presidential race if Hillary Clinton decides to jump in. “Before we enter the 2016 election cycle and the feminists come asking black women for our support for your candidate,” she said, “you might want to read up a bit on black women and our feminism.”