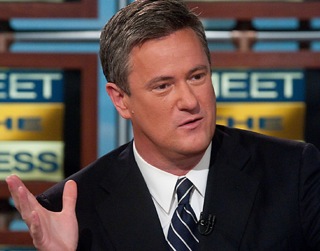 Voting is the single most intimate act in the American political process, and MSNBC’s Joe Scarborough decided today to bare all by leading Politico readers through his voting thought process, and how he eventually ended up giving his vote to Rep. Ron Paul. Going through a process of elimination, Scarborough writes that even he was shocked that his decision to vote for Rep. Paul “would happen as fast as a tornado whipping through an Amarillo parking lot.”

Scarborough narrates the way he came to his decision, sitting at his kitchen table, looking down the list of names. He couldn’t vote for Mitt Romney or Rick Santorum “on his life” because of their big government principles, and Newt Gingrich he describes as “ideologically unmoored.” So Rep. Ron Paul it is.

He does admit it was something more than that– that ideological consistency and inconvenient honesty had much to do with Rep. Paul’s appeal. “I cast my vote for the only candidate who spent his entire public career standing athwart history yelling ‘stop’ to an ever-expanding centralized state,” he explains, setting the scene with the fact that Romney, Santorum, and Gingrich were all promoting an expansion of the federal government. “It was the first ‘protest’ vote I’ve ever cast, and it felt … well, it felt good,” Scarborough adds, also noting that he does not think Rep. Paul could ever win a national presidential election but felt the need to promote Rep. Paul’s “candor” in some tiny way.

As Scarborough explains, it was a surprise vote even to him, as a former Congressman himself with a moderate Republican background, though his aversion to Romney was never a particular secret. But a public statement of support for Rep. Paul from a prominent Republican is certainly something new, if a little late to make a difference for Rep. Paul.