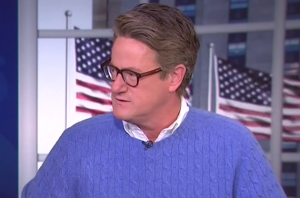 The host of MSNBC’s Morning Joe Joe Scarborough slammed CNN for being “obsessed” with Donald Trump during Wednesday’s Republican presidential debate to the detriment of other candidates.

“I would like to have actually seen the other candidates instead of people throwing quotes around trying to start a schoolyard brawl,” he said. “It was not a serious debate.”

Scarborough said if he was one of the GOP candidates, he would have confronted the CNN moderators. “I swear to God, I would have after about 45 minutes, I would have come out and said, ‘Hey, when you guys are finished obsessing over Trump, I’ll be in the plane.'”

The former Republican congressman said he felt especially bad for Mike Huckabee. “What the hell? They went two hours without asking him a question. It was a full-on obsession with Donald Trump. They did a disservice to anyone who was watching that.”

Guest Willie Geist defended the performance of CNN moderator Jake Tapper. But he admitted, “I think CNN was trying to put on a TV show and the star of that TV show was Donald Trump, and they were going to make sure he was involved directly or indirectly in every question.”