MSNBC’s Jonathan Alter On Benghazi Hearing: ‘How Can You Cover Up Nothing?’
video

MSNBC’s Jonathan Alter On Benghazi Hearing: ‘How Can You Cover Up Nothing?’ 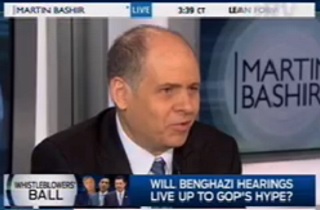 As Republicans predict that Wednesday’s hearing of the House Oversight Committee on the September 11, 2012 attacks in Benghazi, Libya will be President Obama‘s undoing, MSNBC contributor Jonathan Alter expressed skepticism about that notion. On Tuesday afternoon’s Martin Bashir program, Alter responded to the upcoming hearing by calling it “kind of disgusting,” and asked host Martin Bashir, rhetorically, “How can you cover up nothing?”

Martin began by asking contributor Prof. James Peterson if the hearing could possibly meet sky-high expectations. “No less an authority than Representative Trey Gowdy of South Carolina says ‘They’re going to be explosive,” Bashir said. “Given how much we already know, how are the hearings supposed to live up to that kind of hype?”

Prof. Peterson expressed doubt, saying that his reading of the testimony expected to be given by Gregory Hicks was that “it doesn’t seem to be condemning, nor proof what their essential case is, which is the Obama administration is somehow covering up or obscuring some piece of information that will be explosive, and unveil some miscarriage of justice in the Benghazi attacks.”

Alter told Bashir that he expects the testimony to reinforce facts that are already known about the attack. “It almost becomes like a dancing on the head of a pin, or something we learned about in philosophy class,” Alter said. “How can you cover up nothing?”

He reminded Bashir that “Leon Panetta testified to the events that Gregory Hicks is going to testify now to, in February. He explained that, tragic as it was, and nobody is minimizing how tragic these events were, the U.S. military felt like it didn’t have time to get forces from Spain and France, Spain and Italy, into Benghazi in time.”

In February, then-Secretary of Defense Leon Panetta pushed back hard against the notion that more could have been done to help Americans in Benghazi at the time. “This is not 911,” Panetta told CNN’s Candy Crowley,”“You cannot just simply call and expect within two minutes to have a team in place. It takes time. That’s the nature of it. Our people are there, they’re in position to move, but we’ve got to have good intelligence that gives us a heads up that something’s going to happen.”

“Now, the Republicans would make it seem as if the cavalry never arrived,” Alter continued, adding that “It’s not as if nobody ever came, but this notion that has taken root on the right that there was somehow an order to stand down, as if some nefarious anti-American person in the U.S. government wanted these people to die, that’s the subtext of what they’re saying, that some horrible person wanted to not help Americans.”

“Wait, by implication, the President of the United States?” Bashir asked.

“This is really kind of disgusting,” Alter concluded.