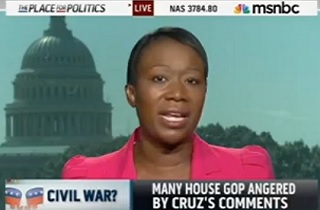 Metaphors are the lifeblood of political commentary, and no political issue has spawned more of them than the Republicans’ years-long effort to govern through doomsday deadlines. After “successfully” playing chicken with the debt ceiling in 2011, and blinking on the Fiscal Cliff in 2012, Republicans are taking another run up that hill by threatening a government shutdown, and maybe a US government default, unless Obamacare is de-funded. On Thursday morning’s MSNBC Live, Joy Reid came up with a kinder, gentler simile for House Republicans’ rush toward ideologically pure head trauma.

House Speaker John Boehner (R-OH) now finds himself reluctantly leading the House Republican charge to shut down the government unless the President agrees to de-fund the Affordable Care Act, a charge being egged on by Sen. Ted Cruz (R-TX). After relentlessly whipping up base support for the strategy, however, Cruz recently left the House GOP holding the government shutdown bag by explaining that “Harry Reid will no doubt try to strip the defund language from the continuing resolution, and right now he likely has the votes to do so. At that point, House Republicans must stand firm, hold their ground, and continue to listen to the American people.”

Despite the fact that a government shutdown would be political suicide for Republicans, and a default even worse, Speaker Boehner doesn’t have enough Republican votes in the House to avoid it. That sort of self-destructive ideological purity is often described with the disturbing idiom “drinking the Kool-Aid,” a reference to the Jonestown mass murder/suicide (which was actually accomplished using cyanide-poisoned Flavor Aid).

MSNBC’s Joy Reid employed a gentler comparison this morning. Asked if the Speaker has any sort of “fig leaf” to avoid the political consequences of this strategy, she replied “At this point, I’m not sure John Boehner has one. John Boehner is like a preschool teacher who can’t control his class, so he’s letting the class eat Play-Doh, despite the fact that eating Play-Doh is going to make them sick, and he can’t do anything about it.”

She added that Boehner has “long since lost control of the House caucus, and so he’s got to keep placating these people, even though they don’t seem to grasp, or don’t want to grasp, what they’re going to do to the american economy.”

The Play-Doh metaphor, while amusing and less morbid than many others, is not without its flaws. While eating Play-Doh, which is primarily a mixture of water, salt and flour, is certainly about as smart as throwing yourself off of a political cliff, the effect doesn’t quite compare:

Your toddler may experience a mild tummy-ache after eating Play-doh. If your toddler ate Play-doh in large amounts, he may even throw up a bit. If this happens, simply provide him reassurance and remind him not to eat Play-doh again. If the vomiting persists, it may be a sign of an allergic reaction to wheat flour, one of the ingredients in Play-doh.

If House Republicans are anything like toddlers, though, there is a ray of hope for Speaker Boehner:

Otherwise, you can let your toddler play with Play-doh worry-free. He’ll eventually outgrow the desire to put it in his mouth.