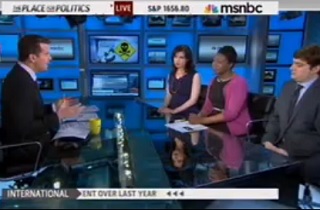 Hot on the heels of confirmation that another threatening letter containing ricin poison was sent to President Obama, MSNBC Live anchor Thomas Roberts asked his panel, Thursday morning, if we are “seeing the dark side of the pro gun movement?”

MSNBC contributor and Managing Editor of TheGrio.com Joy Reid agreed that “we are “starting to see the dark side of the gun debate,” and that the ricin letters are “a frightening manifestation of it.”

The letter that was sent to the President, but intercepted at an off-site facility, reportedly contained threats identical to those sent to New York City Mayor Mike Bloomberg, and to the mayor’s gun control advocacy group. According to NBC News, “All three mailings read in part: ‘You will have to kill me and my family before you get my guns. Anyone wants to come to my house will get shot in the face. The right to bear arms is my constitutional God given right and I will exercise that right till the day I die.'”

The news prompted Thomas Roberts to ask “Are we seeing the dark side of the pro gun movement?”

He added, “Because this really muddies the debate, and tries to just scare everybody into finger-pointing. It adds nothing to the actual conversation of where we need to be in talks of reform.”

“Right, and people don’t talk about it,” Joy Reid replied, “but Roger Wicker from Mississippi got one of those too. What he had done is to vote to end the filibuster in the senate on that failed gun control bill. So you’re starting to see the dark side of the gun debate.”

“The pro gun side, or Second Amendment side, has said we are just peaceful gun owners,” she continued, “but the rhetoric, in terms of media, in terms of online, even in terms of the NRA itself, whether it’s the new president of the NRA talking about the ‘war of Northern aggression,’ or Wayne LaPierre going on those rants against the government, and making Barack Obama seem actually dangerous to people, these sorts of conspiracy theories are now coming — I think they’re coming to fruition in a really frightening way.”

“You see this violent undercurrent of ‘if you come after our guns, we’re prepared to do violence,'” Joy added. “You’ve had people say it in Youtube rants, and now you’re seeing a frightening manifestation of it.”

The Youtube rant Joy was referring to was by Tactical Response CEO James Yeager, whose carry permit was briefly suspended when he threatened to “start killing people” over gun regulations.

Buzzfeed’s Evan McMorris-Santoro cautioned against assigning the ricin letters to opponents of gun regulations. “When a guy with a backpack full of Chick-fil-a sandwiches shot up the Family Research Council, people on the left were not saying that was something that should be attached to all the LGBT rights movement,” he said, but added “I think there is a lot of rhetoric on that side that is really harsh. things that were said about Obama by Wayne LaPierre, as you mentioned, and other people like that.”

“You didn’t have rhetoric on the left calling for almost a revolution,” Reid replied. “What you have is this rhetoric of revolution on the right, not saying that it’s tied to anti-gun control, but there is a lot of rhetoric, I think, that’s irresponsible, that is not, at least, discouraged.”

I can already hear the cries, from the right, that Joy is “politicizing” these ricin letters, and while I think there is a fine line between causally linking rhetoric to actions like these, and using an incident like this to illustrate the irresponsibility of some of the rhetoric, I have a bigger problem with Joy’s premise. Here, we have three ricin letters sent to public figures, which didn’t hurt anyone, and now we’re seeing the dark side of the pro gun movement? The dark side of the pro-gun movement has been well-represented for a very long time, from a senate minority that enforced its will to allow criminals and terrorists to buy guns, to a National Rifle Association that tells parents not to lock up their guns while babies are gut-shooting their own mothers. Ricin letters don’t kill people, guns do.