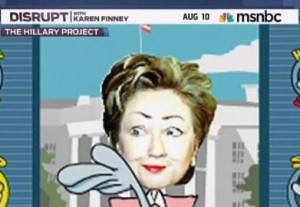 MSNBC host Karen Finney today highlighted an incredibly controversial online game created by a PAC called The Hillary Project called “Slap Hillary,” which is exactly what you think it is. The PAC has come under intense fire for its seeming promotion of violence against women, especially one of the most well-known women in the world, and both Finney and Howard Dean roundly condemned the game, calling on RNC Chairman Reince Priebus to jump in and say things like this are just wrong.

The Hillary Project attempts to defend itself by accusing liberals of not voicing similar outrage at a Slap Palin game released a few years back, though that one appears not to have been created by a Democratic political group. Finney said the GOP should be a lot more outraged about this.

“Priebus should be using and power or influence he has to talk about this, and to say to people, regardless of whether or not you like Hillary Clinton, smacking women or promoting smacking women, particularly when you’re trying to get women voters, is not okay.”

Dean suggested Priebus doesn’t have that kind of power, and used the game to observe that “it looks like the war on women is real.” He and Finney agreed that instead of “encouraging” this kind of behavior, the Republican party should be “calling this stuff out” and use the opportunity to make clear “violence against women is bad.”