MSNBC’s Krystal Ball: Is GOP Opposition to Syria War ‘Rooted in Their Hatred for This President?’
video

MSNBC’s Krystal Ball: Is GOP Opposition to Syria War ‘Rooted in Their Hatred for This President?’ 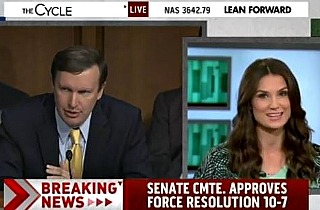 On Wednesday, the Senate Foreign Relations Committee voted to consent to President Barack Obama’s request for an authorization for the use of force in Syria. While most Democrats on the Committee voted in favor of the White House’s request, a number of Republicans, including Sens. Rand Paul (R-KY) and Marco Rubio (R-FL) voted to deny the administration’s request.

In reaction to that vote, MSNBC host Krystal Ball asked Huffington Post editorial director Howard Fineman if the GOP’s opposition to intervening in the Syrian civil war is “rooted in their hatred for this president.”

“Howard, how much of the Republican resistance to this action is rooted in their hatred for this president?” Ball asked.

She referenced an op-ed in The Washington Post by Reps. Tom Cotton (R-AR) and Mike Pompeo (R-KY), both military veterans, who wrote that the GOP should support military action against Syria.

She noted that they were going against the grain of their party by publicly supporting the president. “At the end, they said, ‘don’t worry, we reserve the right to still be able to attack Obama,’” she asserted.

“So, how much of the problem in the Republican caucus with this action is just distaste for the president?” Ball concluded.

“That’s a very big part of it on the Republican side,” Fineman agreed. He went on to say that the contradictions on the Democratic side are just as vexing.