Lawrence O’Donnell Gets Owned By Rev. Franklin Graham During Interview 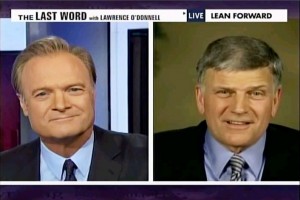 It should have been a slam dunk. The Rev. Franklin Graham spent his weekend spouting crazy-talk about President Obama on Sunday shows, questioning both his citizenship and his Christianity. He unwisely followed up with an appearance on The Last Word, where host Lawrence O’Donnell would surely introduce Graham to the woodshed. Instead, Graham rolled O’Donnell like a junkie with a Lunesta habit.

O’Donnell had Graham dead to rights. Not only had the son of famous televangelist Billy Graham given oxygen to Donald Trump’s Birther idiocy, but he had questioned President Obama’s religion. Even as he admitted that only God knows what is in a man’s heart, he displayed a stunning lack of humility in his attempt to judge just that. He also referenced the Muslim question, which rests on the notion of the “seed of Islam,” which is not a Christian doctrine.

Worst of all, though, he had borne false witness against the President on This Week with Christiane Amanpour. (Set aside, for the moment, that Amanpour spends this interview asking questions like “What will the second coming look like?” with a straight face.)

This is the argument upon which Graham rested his doubts about the President’s Christianity: (emphasis mine)

For him, going to church means he’s a Christian. For me, the definition of a Christian is whether we have given our life to Christ and are following him in faith, and we have trusted him as our Lord and Savior.

That’s the definition of a Christian, it’s not as to what church you’re a member of. A membership doesn’t make you a Christian.

Graham, unlike me, has spoken with the President about his beliefs, yet even I know that Graham’s statement is a falsehood:

So one Sunday, I put on one of the few clean jackets I had, and went over to Trinity United Church of Christ on 95th Street on the South Side of Chicago. And I heard Reverend Jeremiah A. Wright deliver a sermon called “The Audacity of Hope.” And during the course of that sermon, he introduced me to someone named Jesus Christ. I learned that my sins could be redeemed. I learned that those things I was too weak to accomplish myself, He would accomplish with me if I placed my trust in Him. And in time, I came to see faith as more than just a comfort to the weary or a hedge against death, but rather as an active, palpable agent in the world and in my own life.

It was because of these newfound understandings that I was finally able to walk down the aisle of Trinity one day and affirm my Christian faith. It came about as a choice, and not an epiphany. I didn’t fall out in church, as folks sometimes do. The questions I had didn’t magically disappear. The skeptical bent of my mind didn’t suddenly vanish. But kneeling beneath that cross on the South Side, I felt I heard God’s spirit beckoning me. I submitted myself to His will, and dedicated myself to discovering His truth and carrying out His works.

It seems like President Obama’s beliefs about what makes him a Christian line up pretty well with Graham’s, and certainly doesn’t rest his spiritual conversion on a membership card.

There must be something about arguing with a guy who’s convinced he must save you from the ForeverFire that makes a guy overconfident, though, because O’Donnell, instead, tries to deploy a half-assed logic trap on him. Not only doesn’t it work, but it leaves a mile-wide hole for Graham to run for a 98-yard evangelical touchdown. Before you can say John 3:16 (the entire verse, not just the reference), Graham has smoothly and joyfully converted about a third of O’Donnell’s audience.

Here’s hoping the next person to interview Graham reads this first. And here’s hoping Graham gets O’Donnell’s wallet back to him.