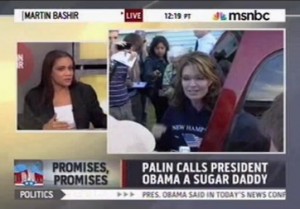 On his eponymous show Monday afternoon, MSNBC’s Martin Bashir discussed a new Facebook posting by Sarah Palin with The Grio‘s Goldie Taylor, and accused Palin of calling President Barack Obama a “sugar daddy,” which he understood to mean “a pimp.”

While Palin’s oddly sexual metaphor was weird and creepy, she wasn’t referring to the President as a “sugar daddy,” but to the American taxpayers. Taylor, for her part, absolved Palin of racism, accusing her, instead, of attention-seeking.

Following a segment on the Michele Bachmann Marriage Vow slavery controversy, Bashir asked Goldie Taylor about Palin’s Facebook posting in which, Bashir says, “she refers to the President as a sugar daddy,” then asks, “do you understand a sugar daddy to be a pimp?”

Taylor and Bashir, despite misquoting Palin, don’t ascribe any racist intent to the metaphor. Bashir says she’s “media-baiting,” while Ms. Taylor says “Palin is in the same place Herman Cain was two weeks ago: she’s grasping for air, searching for relevancy…”

The term “sugar daddy” is a euphemism for pimp (ie, pimp is a subset of sugar daddy), which would make its application to our first black President legitimately offensive, but its primary meaning is an older, wealthier man who holds sway over a young, attractive woman through material means. (It’s also a popular brand of filling-removing candy). The term was apparently coined by Alma Spreckels, in the early 1900s, in reference to her husband, sugar magnate Adolph Spreckels.

Recently, the term has taken on a strong sexual meaning (regular readers have probably seen sugar daddy dating site spam in our comments, until we delete them), which is what is really bizarre about Palin’s Facebook post. Like other metaphors that she has employed, the sugar daddy metaphor isn’t exactly family-friendly. In any case, she’s clearly not applying it to the President (this time), but to you and me:

Hard working taxpayers have been big government’s Sugar Daddy for far too long, and now we’re out of sugar. We don’t want big government, we can’t afford it, and we are unwilling to pay for it.

A bit later, though, the government morphs from gold-digging hottie to under-supplied neighbor, as Palin says “Obama assumes we’ll just go borrow another cup of sugar from some increasingly impatient neighbor.”

Unless “cup of sugar” is a euphemism for…

She also makes an oblique reference to Naughty By Nature’s gleefully raunchy song OPP, saying that “Washington is addicted to OPM – Other People’s Money.”

In any case, Palin’s metaphor is all wrong. If we’re going to use the sexual playing field here, the American people are more like the poor slob who spends all night buying the hot girl drinks, only to have her go home with the guy who not only didn’t pay for a damn thing, but stuck us with his bar tab on the way out. While that dynamic might play out to varying degrees no matter which party is in power, at least the Democrats will occasionally give us a handy in the parking lot.