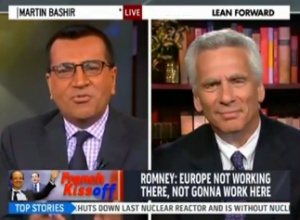 On his show Monday, Martin Bashir got a bit worked up about Mitt Romney‘s comments regarding President Obama and European socialism. While Romney “loves to paint the president as a European-style socialist,” he said, Obama’s not the one who matches that description. Romney is.

In a segment entitled “French Kissoff: What Does The Austerity Backlash Mean For The U.S.?” Bashir noted that Ben Bernanke has suggested that the economy may need some type of additional stimulus. Bashir asked, “But given the condition of Congress and the Republican obsession with what’s failed in Europe, that’s, I guess, unlikely in the short term, isn’t it?”

His guest Jared Bernstein, former economic adviser to Vice President Biden, agreed — adding that those who have been blocking such policies in the U.S. are not likely to amend their views upon seeing the austerity backlash in Europe.

Bashir called Romney’s assertion about Obama’s European views “incredible” and then played a clip in which Romney said:

He’s taking America on a path towards Europe, and Europe’s not working there. It’s not going to work here. Europe’s in real trouble. As their debts mount, as people demand more and more from government and government has to borrow more and more to satisfy their demands.

Turning to Bernstein, Bashir asked, “Jared, how does Romney do that when he knows that it’s him who supports rank austerity measures?”

He added, “He supports Paul Ryan’s budget. He wants to go cut, cut, cut. It’s not president – it’s him. He’s the European Socialist.” (Though socialism isn’t quite known as the ideology of austerity.)

Bernstein replied, “Martin, I feel your, I don’t know what to call it? Frustration, bemusement?” An exasperated Bashir further said, “Well, I mean, it’s just staggering the frustration one feels when you hear the man say outright lies repeatedly.”