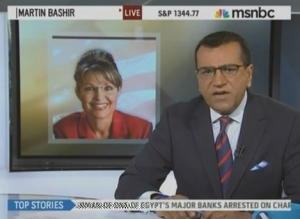 MSNBC’s Martin Bashir isn’t angling to get a seat on the One Nation bus with Sarah Palin. In fact, as he told viewers Tuesday, he thinks the whole thing might just be illegal. How so? Well, if you’re expecting a brainiac argument about campaign finance law or a nuanced take on the media, this won’t be it. Bashir says Palin’s possibly in violation of the law over her use of Old Glory: “The whole thing could be in breach of a federal law because the United States Flag Code establishes important rules for the use and display of the stars and stripes, the flag of the United States.” Oh yes.

Bashir suggests that the American flag simply can’t be used in any form of advertising (which, in enforced, would pretty much destroy President’s Day and 4th of July sales, among others) and Palin’s bus tour, in his view, is all about advertising Brand Palin:

Under standards of respect and etiquette, it’s made clear that the flag of the United States should never be used for any advertising purpose whatsoever. Yet that’s precisely what Sarah Palin is doing. She’s using the flag of the United States for her own financial purposes. She drapes herself in the stars and stripes and makes millions of dollars in the process. This has got nothing to do with the presidency and everything to do with filling her pockets. And by raising her profile, she raises her income. It is as simple as that. So she was right when she said that hers is not a campaign bus. It’s a cash bus and she’ll keep it rolling for as long as she can.