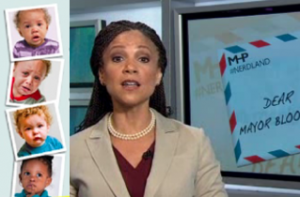 MSNBC host Melissa Harris-Perry used her Saturday morning show “letter” to go after New York Mayor Mike Bloomberg for his controversial new campaign against teen pregnancy. The Bloomberg administration’s marketing arm started posting ads like the ones pictured below around the city this week as part of a public education campaign. 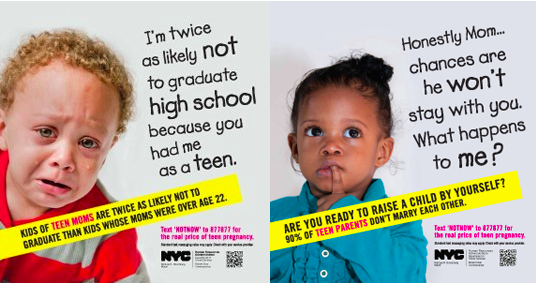 Harris-Perry asked why, when teen pregnancy rates are at historic lows, is the city of New York spending $400,000 to “publicly shame teen parents.”

After discussing some of good news on the teen pregnancy front from recent years, Harris-Perry outlined her objection to the ads, which each feature a “well-fed, gorgeous, but obviously distressed toddler who is spewing questionably interpreted data and plenty of social shame at his or her mythical parent.”

“You know full well that poverty has increased even as teen pregnancy has decreased. And that child poverty is much more closely linked to low-wage work and barriers to employment than it is to maternal age. And you know that poverty among African Americans and Latinos has increased even though those communities have seen the most dramatic decreases in teen pregnancy.

That is the kind of misleading statistic that might lead some people to, you know, blame young mothers for America’s deepening poverty crisis rather than putting the blame where it belongs, on a financial system that concentrates wealth at the top and public policies that entrench it there.”

But the ad above that features a young girl telling her mother that “he won’t stay with you,” was what really put Harris-Perry over the top, rendering her “speechless,” at least momentarily.

“In a society that constantly tells black girls and women through popular culture and public policy that we are easily disposable, un-marriageable and wholly unlovable, this image of a child mocking her young mother with partner abandonment is a step too far. Maybe you don’t realize this, Mr. Mayor, but most of us who were raised by single moms never had any interest in shaming them. We tend to praise them. Recognize their sacrifices and see all the ways they worked to make the world better for us even when it was hard for them.”

Let us know what you think by answering the poll below.