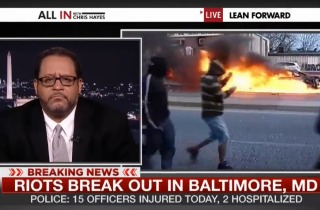 Asked by MSNBC’s Chris Hayes to weigh in on looting and rioting following several days of largely peaceful protests in the name of 25-year-old Freddie Gray, a local resident killed while in police custody, Dyson said all violence is condemnable but added that some context is necessary to understand the current situation.

“The forces of oppression,” Dyson said, “have besieged that urban terrain.” The Baltimore Ravens and Orioles, he added, have contributed to the city’s problem “with their tax exempt status and their being given tremendous goodies to stay in the city” — “the urban blight contrasted to the extraordinary capital for some people.”

Quoting Martin Luther King, Jr.‘s statement that “a riot is the language of the unheard,” Dyson suggested it would be difficult to condemn this riot without also mentioning the broad context for why a local community would destroy itself. Without the current demonstrations, he said, “your cameras, our commentary would not be in Baltimore talking about the slow terror of expulsions from schools, the rising rates of lead poisoning, the export of jobs to places across the waters that have no ability to refuel and recycle that capital back here. So when you put all that together, it’s easy to point a gun of analysis and shoot them with the bullets of our condemnation instead of saying we have to together find a way out of this.”

Dyson later lamented that much of the media coverage will focus on “hooligans” and “thugs,” but will miss larger points he believes need to be heard now that Baltimore is in the spotlight. “What we don’t have commentary about is the theft of capital from these urban post-industrial conditions,” he said. “What we don’t see is the fact that many people live in New York, Pennsylvania, and come to Baltimore and extract revenue from that city and they don’t give back to the communities, and result of there, that’s a sense that these people are disposable.”

So, yes, the violence is unnecessary, Dyson concluded, but what isn’t being said is how if people were to ask the rioters how they could destroy their own buildings, and conceivably their own future prospects, “Many of them would say, ‘We don’t have a future.'”