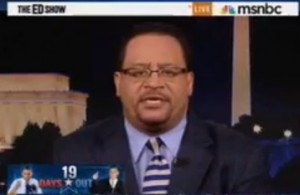 On Thursday night’s The Ed Show, MSNBC contributor and Georgetown Professor Michael Eric Dyson gave dogwhistle-deaf conservatives a taste of their own medicine when he made the unsubtle suggestion that Republican presidential candidate Mitt Romney‘s Tuesday night debate performance resembled, at times, the brutal bullying of a slavery-era plantation “overseer.”

Asked if Tagg Romney‘s remarks about “taking a swing at” the President were part of a pattern, Prof. Dyson agreed, describing Romney as a “man who hovers over the president as if he’s overseeing him, as he actually articulates his words.”

Host Ed Schultz pegged the segment to Tagg Romney’s remarks about “taking a swing at” the President, opining that “the apple doesn’t fall far from the tree.”

“Are Tagg Romney’s comments part of a pattern,” Ed asked Prof. Dyson, “or is there overreaction on this show tonight? Is there disrespect?”

“It’s extreme disrespect, Ed,” Prof. Dyson replied. “It’s an incredibly consistent pattern where the Romneys appear to be invincible, or at least they want to portray this notion that they’re somehow, you know, exempt from the rules.”

Prof. Dyson went on to say that this dynamic is not only a “class based elitist conception,” but that it’s also a “race-based one as well, as you indicated there at the end, because this is white male privilege run amok. This is a man who hovers over the president as if he’s overseeing him, as he actually articulates his words. He refuses to sit down. He invades his space. He tries to disrespect Candy Crowley, and he continually repeats his lines and answers his own questions.”

He then blasted Tagg Romney, whom he said “feels the ability, without compunction and without a sense of remorse, to be able to say he will physically harm, or wanted to physically harm, the President, and the only thing that held him back was the Secret Service. That’s pretty ridiculous.”

Dyson also attacked Ann Romney for talking about her husband’s opposition to embryonic stem cell research on The View, even as “their son, Tagg, used a surrogate mother to have a child, and in that contract was the permission for abortion should an emergency arise.”

Using Tagg Romney’s surrogacy agreement (whose abortion clause was for the health, not the life, of the surrogate mother, at her complete discretion) in a political argument is uncomfortable, it feels wrong, which is, ironically, its power as a political argument. That same palpable sense of intrusion you’re feeling right now is precisely what it feels like to have the government intrude into the same decision, as Mitt Romney would have it.

As for the “overseer” comparison, it’s a little strong. Is Mitt Romney the walking definition of white privilege? Of course. Was he disrespectful to President Obama? Of course. In Romney’s defense, he was in a tough position in that second debate, faced with the choice of being run over by a resurgent President Obama, threading an impossibly tiny needle by being assertive yet respectful, or bulldogging it. Make no mistake about it, President Obama definitely took full advantage of the gravity of his office in that second debate. But Romney overshot assertive by a long stretch, and was disrespectful in a way that he probably paid for with viewers.

But Prof. Dyson didn’t actually call Romney an “overseer,” now, did he? The best part of this clip is the complete silence we can all enjoy from conservatives, who undoubtedly heard no such thing.