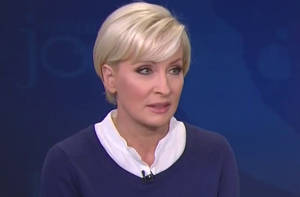 Sanders said at a campaign rally that “all the shouting in the world” could not fix the problems of gun violence. Clinton then painted those remarks as sexist, saying Saturday, “I haven’t been shouting, but sometimes when a woman speaks out, some people think it’s shouting.”

“That’s pathetic,” he said for her. “Absolutely pathetic.”

“I know she’s the frontrunner, I’m sure she will win,” Brzezinski continued. “But that’s pathetic. That’s the sort of straight out of Veep. Except when Veep does it it’s hysterical, because it’s so ridiculous; that wasn’t funny, it was pathetic.”

“I know sexism. Hillary Clinton knows sexism. She should know better than let her staff make her do that,” Brzezinski said. “She needs to get out there and talk. Everyone stop writing lines for her. They’re bad, really bad.”

“And when we talk about sexism, we talk about women and equal pay and all these things that are important. Let’s not denigrate it with that stupidity, because we embarrass ourselves,” she concluded. “I’m like, cringing.”

“You shouldn’t have [let me announce it],” she chided Scarborough. “I’m going to get killed. But that’s okay, because that was pathetic. That was sad and pathetic.”