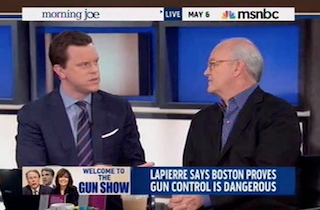 Morning Joe kicked off the week with a look at the NRA convention and Wayne LaPierre‘s speech. Questioning how so many people showed up to see LaPierre, Mika Brzezinski and Mike Barnicle in particular criticized his message and his approach — contending that he’s driven by fear of losing his power.

Barnicle was especially frustrated as he watched the clip in which LaPierre spoke of “frightened citizens,” asking, “How many Bostonians wish they had a gun two weeks ago?”

He did note that there was likely some percentage of people who did wish they had a gun, but that most people he knew were content to have law enforcement handle the situation. From there, Brzezinski went on to add that the convention’s attendees are likely “really good people, family people, people who love this country.” In that case, “are we missing something completely here?”

As Mark Halperin responded by noting how the NRA isn’t an organization that’s been known to show weakness, Willie Geist later jumped in to push back slightly. “We shouldn’t talk about people who go to NRA conventions like some strange tribe, like people from a foreign country,” he asserted. “They’re — 99.9 percent of them are us, they’re law-abiding citizens that care about their rights and their guns […] I don’t think they are represented well by Wayne LaPierre.”

LaPierre, Geist added, “is not speaking on behalf of them” — to which Barnicle remarked, “he’s inciting a riot.”