MSNBC’s Mike Barnicle: Why Did Obama Give A Speech If He Had ‘Absolutely Nothing To Say’ 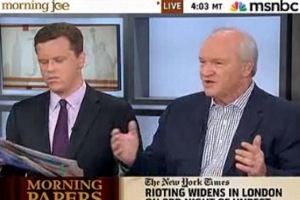 President Obama’s speech yesterday in the aftermath of S&P downgrading America’s credit rating resulted in generally negative reviews from the Morning Joe crew. As Mike Barnicle repeated “why, why, why” would Obama go out with anything to say, Mika Brzezinski attempting to defend Obama, suggested she knows at least one person who thought it was a good speech. Joe Scarborough joked that the one person was probably the President himself.

Barnicle elaborated on his disappointment with Obama and why he expected something stronger:

Barnicle was stunned why Obama didn’t “show some sense of urgency.” Yet Scarborough offered a theory, that Obama simply reverts to doing what he knows best, giving a speech:

“There has been the belief in the foreign policy realm . . . that this guy thinks he can give a speech and that is the ends and not the means to the end. I fear that we are seeing the same thing play out domestically now. . . . When it comes to taking care of the debt, all he is is talk.”

When others on the panel piled on, arguing since Obama lacked passion and lacked a plan, he would have been better off not saying anything at all, Mika again rose to Obama’s defense. “Imagine if he didn’t say anything, you all would be going crazy,” she worried. Yet it seems like what he did end up saying wasn’t a well-received alternative.