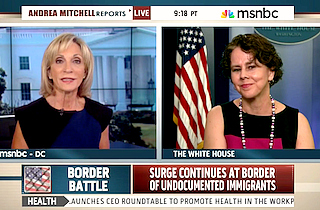 MSNBC anchor Andrea Mitchell grilled White House Domestic Policy Council Director Cecelia Muñoz over the Obama administration’s perceived lack of preparedness about the border crisis and the following poor optics, including a picture of President Barack Obama playing pool in Denver last night. Mitchell’s questions came after Representative Henry Cuellar (D-TX) has been criticizing Obama for not visiting the border during his swing through Texas this week, criticism he said he’s heard about from the White House.

“With all due respect, the reality on the ground is that the administration did not stay ahead of this,” Mitchell said, after Munoz listed multiple steps the Obama administration had taken in the past couple months. “There were months where this was building up. The reality is that the White House has been slow to react. And that there is something to be said for presidential optics, if you will, for presidential appearances. That’s part of leadership, is it not?”

“The leadership is really about making sure that we’re being effective in managing the situation,” Muñoz replied. “The whole federal government is engaged in this effort from the president on down.”

“Leadership does involve showing concern,” Mitchell said, citing Obama’s trip to the Jersey Shore following Hurricane Sandy. “People are asking, including a Democrat congressman, one of your own members, why he is looking so aloof, and why ever he decided to play pool in Colorado.”

“So far the politics isn’t working and the substance isn’t working, so somebody’s gotta revisit this,” Mitchell added. “What has been done so far has not stemmed the flow. The White House can say it all they want, but at some point are going to ask, and right now your own Democrats on the Hill are asking why this was permitted to get to this stage.”