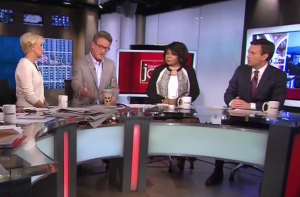 “Some say the president might have been a tad bit condescending and maybe not the best approach to selling the nuclear deal in that speech,” host Mika Brzezinski said. “Some might say that. What do you think?”

“My guess is those are the same people trying to kill the deal…” Earnest responded. “I would concede the president did not pull any punches yesterday.”

“Yeah, I would say if you compare Republicans who fought in the war with Iranian hard-liners, that would be defined as not pulling any punches,” host Joe Scarborough responded bitterly. “Was that necessary?”

“I think what he did is made the point they are making the same argument, that it’s hard-liners in Iran suggesting they should kill the deal,” Earnest said. “There’s no doubt they’re making this same argument.

But MSNBC’s Chris Jansing didn’t think it was so clear-cut. “He said these are folks who are chanting ‘Death to America.’ He added that little phrase in there.”

Earnest began to respond, saying “Well that, was a different part of it…”

“No, it wasn’t!” she cut in. “I’ll read you the quote: ‘It’s those hard-liners chanting ‘Death to America’ who have been most opposed to the deal, they’re making common cause with the Republican caucus.’ It was all one sentence.”