MSNBC’s Phil Griffin: ‘We Have Beaten CNN, We Are A Solid No. 2….Fox Is Now In Our Vision’ 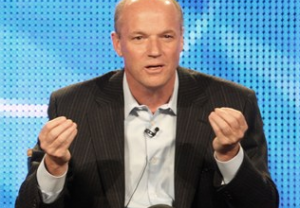 In a profile of MSNBC by Philadelphia Inquirer reporter Bob Fernandez, the president of MSNBC, Phil Griffin, describes a network that’s survived the transition to Comcast and the exit of star host Keith Olbermann–and, he tells the Philly paper, has its sights set on becoming number one in cable news. “I want to make up ground with Fox News. That’s the goal,” said Griffin.

Griffin insists MSNBC is comfortably ahead of rival network CNN–despite several weeks of third-place finishes for the network throughout its primetime lineup as CNN and Fox have seen boosts to ratings with coverage of Japan, Egypt and Libya. “We have beaten CNN, and we are a solid No. 2…Fox is now in our vision, and there are a couple of hours where it’s getting close.”

That would’ve been a far more timely argument three weeks ago. As we’ve reported, ahead of the recent flareup of international news across five continents, MSNBC was showing stability post-Olbermann and–in the case of Rachel Maddow–some growth. Whether those patterns will return once the international news cycle winds down remains unclear–though MSNBC has to a certain extent ceded second place overall to CNN on major breaking news. Griffin told Bill Carter of The New York Times, “This is where CNN excels. This is in their bull’s-eye, and they’ve done a great job. Even Fox News, which dominates them, gets beat by CNN at times like this.”

And yet after a strong February, the loss of ratings momentum at the expense of CNN and Fox has resulted in some changes in the way MSNBC programs, even choosing to staff up on weekends during the intensifying situation in Libya after receiving widespread criticism for sticking with taped programming–including the lucrative prison documentary series Lockup–on Friday nights and weekends. Griffin told the Times Lockup presented a “tricky situation,” since “this is our strategy for weekends, and it has worked well for us.” Its audience now “has an expectation” of seeing such programs on Saturday and Sunday nights, he said.