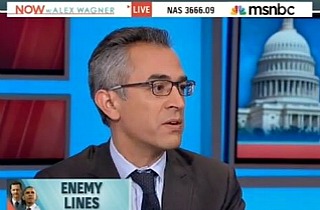 MSNBC.com executive editor and MSNBC commentator Richard Wolffe tore into President Barack Obama on Friday following the conclusion of his address to reporters at the G20 summit in Russia where he discussed the need for intervention in the Syrian civil war. Wolffe said Obama looked “tired,” and his performance was “embarrassing.” Wolffe added that the case the president attempted to make for intervention was “muddled and unconvincing.”

Wolffe began by agreeing with the panel on MSNBC’s Now with Alex Wagner that the “service professionals” quoted in reports strongly questioning whether the administration had a clear and achievable goal in Syria were out of their depth. “I’m afraid we have civilian control of the military for a good reason,” he said.

However, Wolffe clarified that civilians, too, are unconvinced by the case for intervention the president has been making.

RELATED: Obama Admits Syria Reluctance at G20 Press Conference: ‘I Was Elected to End Wars, Not Start Them’

“I do think that the president’s press conference today was actually embarrassing,” Wolffe said. “It was as muddled and unconvincing as you could possibly imagine.”

“If you want to take a country to a difficult place which is this authorization for war, you have to be much more clear and convincing about what the rationale is,” he continued. “At the heart of this was the absolute moral outrage of those civilians being gassed in their sleep. That’s it. And this administration cannot seem to stick to that line which is how they got into this position in the first place.”