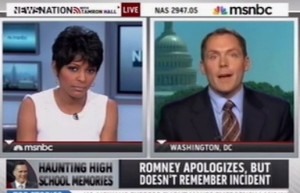 During a segment on the Mitt Romney campaign’s poor handling of the fallout from the Washington Post bullying story, News Nation host Tamron Hall got into it with frequent MSNBC guest and Washington Examiner correspondent Tim Carney, eventually cutting his mic. Carney’s crime? Accusing Tamron of playing the “old media trick” of “justifying second day coverage” by hyping a story in the first place, then claiming people are talking about it.”

After going over the bullying story with Democratic strategist Jimmy Williams, Hall switched gears to discuss Romney’s testy response to a local Colorado reporter’s question about medical marijuana. Carney then played the old conservative media trick of blaming the media when their own candidate screws up, but he made the mistake of doing it to that media’s unamused face.

After she played the clip of the marijuana question, Tamron asked Carney for his reaction to a response that “people are raising an eyebrow about.”

“I’ll talk about the marijuana in one second,” Carney said. “What you’re doing here is a typical media trick. You hype up a story, and then you justify the second day coverage of the story by saying people are talking about it. Here’s how romney responded to it. Let’s move on to substantive issues.”

Hall was having none of that. “You didn’t have to accept the invitation to come on,” she said. “You knew what we were going to be discussing.”

Carney tried to protest, but Tamron cut him off. “Hang on. You’re kind of in my house here. The problem is this. The story is out there. You’re right. I am not saying that we should belabor what happened 50 years ago. We’re talking about the response by the campaign and by the Governor. Not just on this issue.”

Carney tried to recover, and lighten up the mood. “You are bringing up a meta story. What is Romney’s response to this other non-story. I’m trying to go meta meta on you and say –”

“You don’t want me to go anything on you,” Hall interjected. “You’re actually irritating me right now. I’m going to be honest with you. Yes, you are. You knew the topics we were going to discuss. You knew them. You agreed.”

“And we are not talking or demeaning — listen, 50 years ago, I was a much tougher kid probably than Mitt Romney was in high school. I’m not talking about the issue of whether he was bullying or not. He said he doesn’t remember. To be fair, I cannot say he does. What I’m asking you about is how the campaign has handled this decision, handled this situation, how he handled the Colorado reporter. How he handled same sex marriage where he said he agrees with gay parents being able to adopt, but he does not agree with same sex marriage. Just the handling of questions on the economy. If you’re not comfortable about that, I am a-okay, but you’re not going to come on and insult me. You won’t come on and insult the network when you knew what you were going to talk about.”

She then finished the segment with Williams only.

Carney is normally a moderate, uncontroversial presence on the network, but his suggestion that Tamron Hall was playing some sort of trick was out of line. In the middle of a segment about a poor response to a story about bullying, it doesn’t seem like a stretch to bring up an example of another poor response that essentially consisted of Romney attempting to bully a local reporter. Kind of a two-fer.

It’s also possible, but not likely, that Carney is unaware that Romney has a history of being a prick about medical marijuana.

Carney was still around at the end of the segment, mic still cut, and when everyone cools off, I’m sure he’ll be back. I like Carney, but the constant drumbeat that the media is to blame for all the mistakes conservatives make is exhausting sometimes. If Carney had bothered to ask, I could have told him that Tamron Hall isn’t the one.