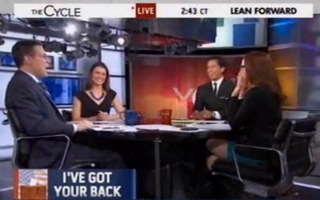 On Friday, the hosts of MSNBC’s The Cycle unanimously approved of the pro-Barack Obama ad featuring HBO star Lena Dunham, in which the actress equates casting a vote for the president with losing one’s virginity. The Cycle crew said they found the ad funny and clever – it is neither, in fact. But the MSNBC team deprived their audience of solid analysis about the political motives behind this ad. Many of The Cycle-rs determined that Republicans found the ad revolting because of the loose morals Dunham displayed by suggesting to her young audience that voting is the civic equivalent of coitus. In fact, many conservatives greeted the ad with glee – it signals how terrified the Obama campaign is about their rapidly dissolving base.

After playing Dunham’s ad in its entirety, both Touré and Krystal Ball said this was a “great ad.”

Ball said that conservatives have been “outraged” over this ad for the better part of the past 24-hours.

S.E. Cupp agreed. She said she was not outraged – she even found it “kind of funny.”

Steve Kornacki said that President Ronald Reagan had made a similar innuendo-laden reference to one’s first experience in the voting booth. It did not appear to occur to Kornacki that noting that a man born in 1911 who made this same joke in the mid-1980s may undercut the notion that this ad is in any way clever.

I am not entirely sure that the hosts believe that there has been widespread outrage among conservatives over this ad. Sure, there are the occasional conservative bloggers who saw it and were repulsed by the implied lasciviousness. Red State blogger Erick Erickson indulged in a bit of hyperbole when he tweeted that the ad proves we live in a “fallen and depraved world destined for the fire.”

But that was a minority opinion after the ad dropped last night in my twitter feed – populated by conservative and liberal opinion makers alike. The reaction I saw from conservatives well versed in the nuances of politics was mockery; not about the ad’s subject matter, but the ad’s betrayal of the deeply troubling circumstances the Obama campaign is facing.

What is interesting is that the ad betrays the Obama campaign predicament – their base is crumbling.

The president has spent the last several weeks making a concerted effort to dumb down the level of his campaign’s rhetoric. He ensured that a Rolling Stone magazine reporter would print him describing his opponent as a “bulls***ter.” He has given interviews to every late night comedy host, FM radio DJ and teen-dominated cable network that he could. The president will sit down with MSNBC’s Morning Joe crew on Monday. Finally, his campaign releases this small-bore ad targeting college-age, unmarried women – a group which the president had a near 20 point advantage among less than one month ago. Obama now maintains only a narrow lead with this demographic.

It is not the substance of the ad that is damaging to the Obama campaign, but who they are targeting. The above strategic choices are aimed at shoring up his core supporters. Obama’s base of support is disintegrating, and they don’t care who knows it at this point. Lena Dunham’s ad was behind emergency glass last week – they broke it because the Obama campaign is facing a clear and immediate emergency. The Cycle hosts are savvy enough to know this – even in passing, they should have made mention of this fact.