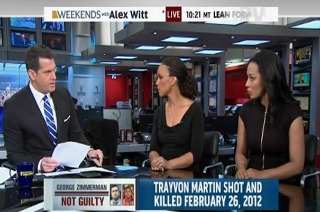 “There’s a lot of white shame today,” said MSNBC anchor Thomas Roberts on Sunday which his network rebroadcast on Tuesday. The anchor said on MSNBC that his white family and friends, as well as social media contacts, have expressed their shame over their race as it relates to the verdict in the trail of George Zimmerman. “If you’re an other,” Roberts warned, “Be worried.”

“I’ve been getting this from family, loved ones, all the people in my life and through social media, and I’ll say it, honestly, there’s a lot of white shame today,” Roberts told MSNBC host Melissa Harris-Perry. “And while we look at lady justice and she’s supposed to be blind, it’s like, what are we saying about the life of this kid being disposable?”

RELATED: Thomas Roberts Goes Ballistic On Hate In America, Calls For ‘I Am Other’ Agenda For MSNBC

“And there’s this ‘otherness’ factor going on,” Roberts continued. “He was an ‘other,’ and he was suspicious, and he’s walking while black, and he’s an other.”

On Monday, Roberts exploded at the many examples of what he identified as hate in America and called on his network to adopt an “I am other agenda.”

An earlier version of this article claimed Roberts said the above quote on Tuesday.