Thomas Roberts: Some In GOP Want ‘A Time Machine’ To When ‘Slavery Was Cool’ 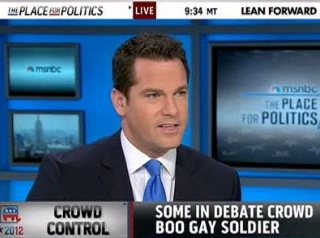 MSNBC anchor Thomas Roberts, like many watching last Thursday’s debate, was fairly uncomfortable with the way the Republican crowd greeted an openly gay soldier serving abroad: with boos. But in expressing his disgust to guest Chris Hayes on his program Friday, he went further than to critique the crowd’s homophobia, claiming Republicans wanted to “build a time machine” to were “no women voted” and “slavery was cool.”

The context of the conversation was the response that Rick Santorum gave to a question from a gay soldier in Iraq, suggesting that he would be grandfathered into the military but he would reinstate Don’t Ask, Don’t Tell. To Hayes, it was “the applause that Rick Santorum’s answer got” that was disturbing and indicative that, much as the Tea Party and libertarian factions of the party were socially liberal, “the base is still very hung up on cultural issues.” Roberts agreed, in much stronger terms, decrying Republicans who “love to stand and wave their military support all the time” but when asked to support them don’t. Roberts likened the ideology to wanting to “build a time machine and go back in time– no women voting, slavery was cool…” The comment elicited a laugh that continued into the claim, which both found comical, that Santorum implied that sexual activity simply had no place in the lives of soldiers.

Exactly what slavery had to do with the very ugly homophobia some exhibited at the debate was never quite explained, nor was there the caveat that some candidates (perhaps most prominently Gary Johnson— on MSNBC!) agreed the booing was repulsive. Nor is this the first time that Roberts make a sweeping socially liberal claim on his program, having challenged GOProud leader Jimmy LaSalvia to explain how he didn’t see that Rep. Michele Bachmann wanted to “extinguish” him. And for a pundit, neither attack would be particularly salacious; people like Sean Hannity and Ed Schultz make biting editorial points all the time– and are appropriately torn apart by critics for building silly bridges under which there are no rivers. Calling the party of Rep. Bachmann, Sarah Palin and Herman Cain sexist and racist for booing a white male soldier is prima facie silly and dilutes whatever larger point about tolerance Roberts had to make. Is it sillier than calling African dignitaries “hoodlums,” or claiming the Congressional debt crisis last summer was a race issue? No, but at least the pundits that said those things aren’t being marketed as straight news reporters.

But for a daytime news anchor, these are murky waters. There is an expectation of objectivity in running the show during the day– in fact, the entire point of bringing in a commentator like Hayes is because Roberts isn’t expected to give the enlightening opinions himself. And by the rawness of the comments– bringing race into an entirely separate issue is no light accusation– it is clear that Roberts wasn’t trained in the art of making intelligent observations in incendiary ways (or making incendiary observations in intelligent ways). He’s a journalist, not a commentator. That’s not to say that Roberts’ opinions don’t merit a forum, offensively articulated though this one may have been. But a daytime hard news program is not the place for this language without the audience being signaled that what they are about to watch is editorialized.